The estimate of potential GDP and its implications for fiscal policy

Italian GDP grew yearly on average by 1.5 percent during the fifteen years before the current crisis, i.e. 1992-2007. In the same period, according to the model agreed at the EU level, average potential GDP growth rate was 1.4. Both effective and potential GDP growth rates are significantly weak if compared to the other European or OECD countries, due to the relevant structural problems that have been characterizing the Italian economy well ahead of the crisis.

The same model forecasts a decrease of potential GDP growth by 0.2 percent between 2008 and 2015, which implies a cumulated drop of around 2 percent; in the same period effective GDP is supposed to decrease by 1 percent (1). In other words, the crisis would have reduced not only potential GDP growth rates but also the country’s productive capacity.

To which extent is the estimate of potential output reliable? Identifying the cyclical and structural components of the output, a complex task even in normal conditions, becomes particularly puzzling in years characterized by a persistent lack of aggregate demand (2). It is a crucial issue because the estimate of the potential GDP impacts on structural budget balance, an indicator that plays a fundamental role in shaping the fiscal policy of the Eurozone countries.

On paper, the decrease of potential output can be due to an overestimate in pre-financial crisis years or to its consequences – thus implying a true structural break.

Explaining the drop in GDP potential after the crisis by its overestimate in pre-crisis years looks unlikely in Italy, given the lack of assets bubbles and the high and persistent primary surplus (above 3 percent of GDP on average) before the crisis as well as considering that regulation of goods and labour markets had an evolution in line with other European countries (3).

The other possible explanation is linked to the crisis and seems more realistic: strong shocks in aggregate demand, if not properly counterbalanced, can produce persistent damages to the economy through the so-called hysteresis (4) effects. After a negative shock firms can choose to postpone their investment plans, e.g. in research and innovation, lower the turnover and – possibly – shut down factories and productive sites. Moreover, a prolonged recession frequently implies an increase of long term unemployed who tend to lose their skills and/or detach from the labour market, deteriorating the match between demand and supply and increasing segmentation. At the aggregate level, these effects can have long lasting impacts on the future productive capacities of an economy hit by a deep and long crisis.

The economic literature agrees on the existence of strong hysteresis effects but the estimates on its impact on GDP growth rates vary in their magnitude. In the model used at the EU level low or negative effective GDP growth rate impacts on potential GDP trough statistical filters; these increase the strength of that link as the crisis continues, because the methodology underestimate the amplitude of the cycle and identify as structural the recent developments. As a consequence, the model produces pro-cyclical estimates of potential GDP which implicitly assume strong hysteresis effects. This methodology showed less downsides in the decades before the crisis – when the correlation between effective and potential GDP was strong – as cyclical fluctuations were shallow; in the current economic environment with a persistent lack of aggregate demand, the model tends to underestimate the potential output.

This issue is confirmed if one considers the pro-cyclicality of the estimates of the structural unemployment rate (Non Accelerating Wage Rate of Unemployment - NAWRU), especially relevant for the methodologies based on the production function, such as the one used at the EU level (5). Empirical analyses show that in Italy the NAWRU estimated by the model tends to follow the changes in cyclical unemployment. In the current scenario characterized by a prolonged increase of the unemployment rate, the estimate of the NAWRU is therefore higher than that obtained by properly taking into account the impact of cyclical factors; in countries that have experienced a particularly strong cumulative decline of GDP the model offers unlikely results – e.g. in Spain, the equilibrium non inflationary unemployment rate would be close to 21 percent. The bigger the value of the NAWRU, the lower the potential; as far as fiscal policy is concerned, during prolonged and intense recessions there is the concrete risk that the model overestimates structural deficits.

In order to estimate the NAWRU, the model exploits the relation between the wages and the rate of unemployment dynamics (the Phillips curve); but in an environment of historically low interest rates and weak prices this relation seems to have lost significance, probably reflecting a structural break.

Even assuming significant hysteresis effects, it seems that a reduction from 1.4 to -0.2 per cent in the growth rate of potential GDP – from the period before and after the crisis – is particularly large. For example, assuming as of 2008 a significant decrease in the growth rate of potential GDP, but not as marked as estimated by the model – for example, from 1.4 to 0.4 per cent, rather than -0.2 – the structural budget balance would have basically reached the medium term objective as early as 2012 (see graph 1).

The models used by other forecasters (for ex. the OECD) are not immune from these shortcomings, suffering from the distortions related to the dynamic of the observations at the end of the sample, including those resulting from a revision of the forecasts; on the other hand, it is not surprising that analytical tools designed to cope with "normal" economic circumstances are unable to adequately capture the impact of structural break to macroeconomic variables occurred in 2008.

In conclusion, the decline in potential GDP growth rate stemming from the model agreed under the EU is particularly marked in Italy (and other countries), largely because of the working of statistical filters that implicitly assume a very pronounced hysteresis. It is likely that there are significant persistent effects of the long recession; however, in the model estimates they appear excessive. The prediction of the potential output made by the model must therefore be considered with extreme caution.

In the light of the structural break occurred in 2008 and the relevance for the fiscal policy, it is appropriate that national and European policymakers use with extreme caution the potential GDP estimates, which are subject to such an uncertainty. A fortiori given the asymmetric risks that make the consequences of a potential underestimation of GDP – and therefore the design of a wrong economic policies mix – potentially far more serious than those related to an overestimation in terms of increased danger of stagnation and deflation 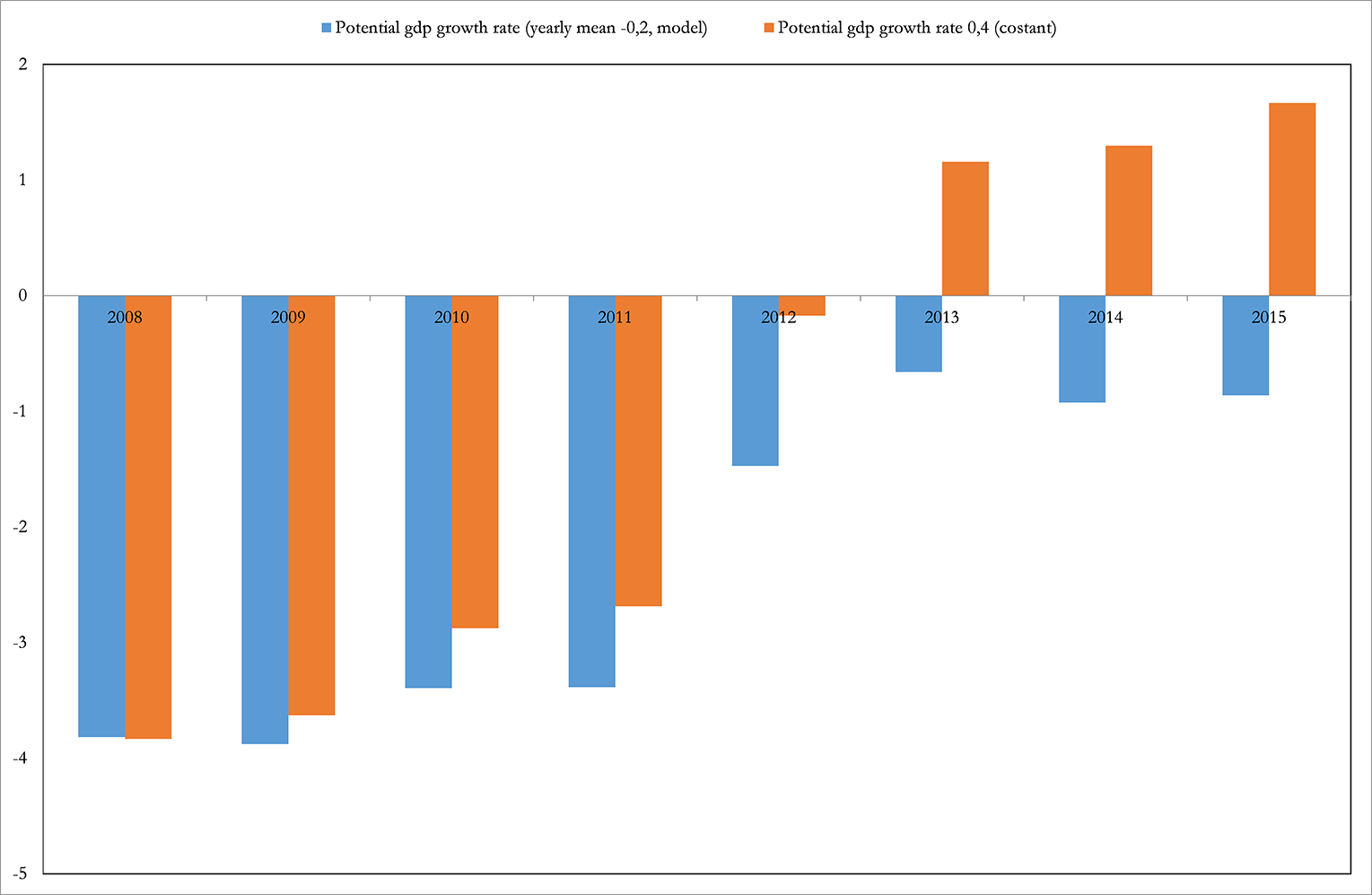 On the other hand it should be noted that, if the impact of low growth on potential would be as large as implicitly assumed by the model, it would be even more urgent to avoid restrictive macroeconomic policies so as not to damage the long-term prospects. Paradoxically, the model agreed at the European level provides strong arguments to those who embrace a more gradual fiscal consolidation.

1. For the years 2014 and 2015 we have used the programmatic estimates recently reported in the Update of the DEF.
2. IMF, Structural Balance Targeting and Output Gap Uncertainty, working paper WP/14/107, June 2014.
3. http://www.oecd.org/els/emp/EPL-timeseries.xlsx; http://www.oecd.org/eco/reform/Database_PMR.xlsx.
4. NBER Macroeconomics Annual 1986, Volume 1, Stanley Fischer, editor, MIT Press, 1986,Hysteresis And The European Unemployment Problem, Olivier J. Blanchard, Lawrence H. Summers, p. 15 – 90.
5. See in the Update Note of the DEF, the Focus The estimate of the potential output.