Italy is often described, especially in the international community, on the basis of several negative indicators: the public debt, the low level of competitiveness, the nominal budget deficit (which, in the past, led to the opening of an excessive deficit procedure by the European Commission).

However, alongside these data, there are economic aggregates useful for presenting Italy as what it is: one of the leading countries of the developed world, the second-ranking European country in terms of manufacturing output, and the third-largest economy in the Euro Area. A country that has managed in the past 20 years to control its public accounts, positioning itself as one of the most virtuous countries in Europe and in the world.

This presentation highlights certain economic data about Italy that are never mentioned, or not mentioned enough, in order i) to counter certain widespread prejudices that are not based on facts, and ii) to appropriately represent a country that contributed to the founding of the European Union.

The primary surplus in Italy's public accounts is among the highest in the world, and has been the most stable among the Member States of the European Union for the past 23 years.
In 2014, the ratio of the primary surplus to GDP was among highest of the most virtuous countries in the EU. 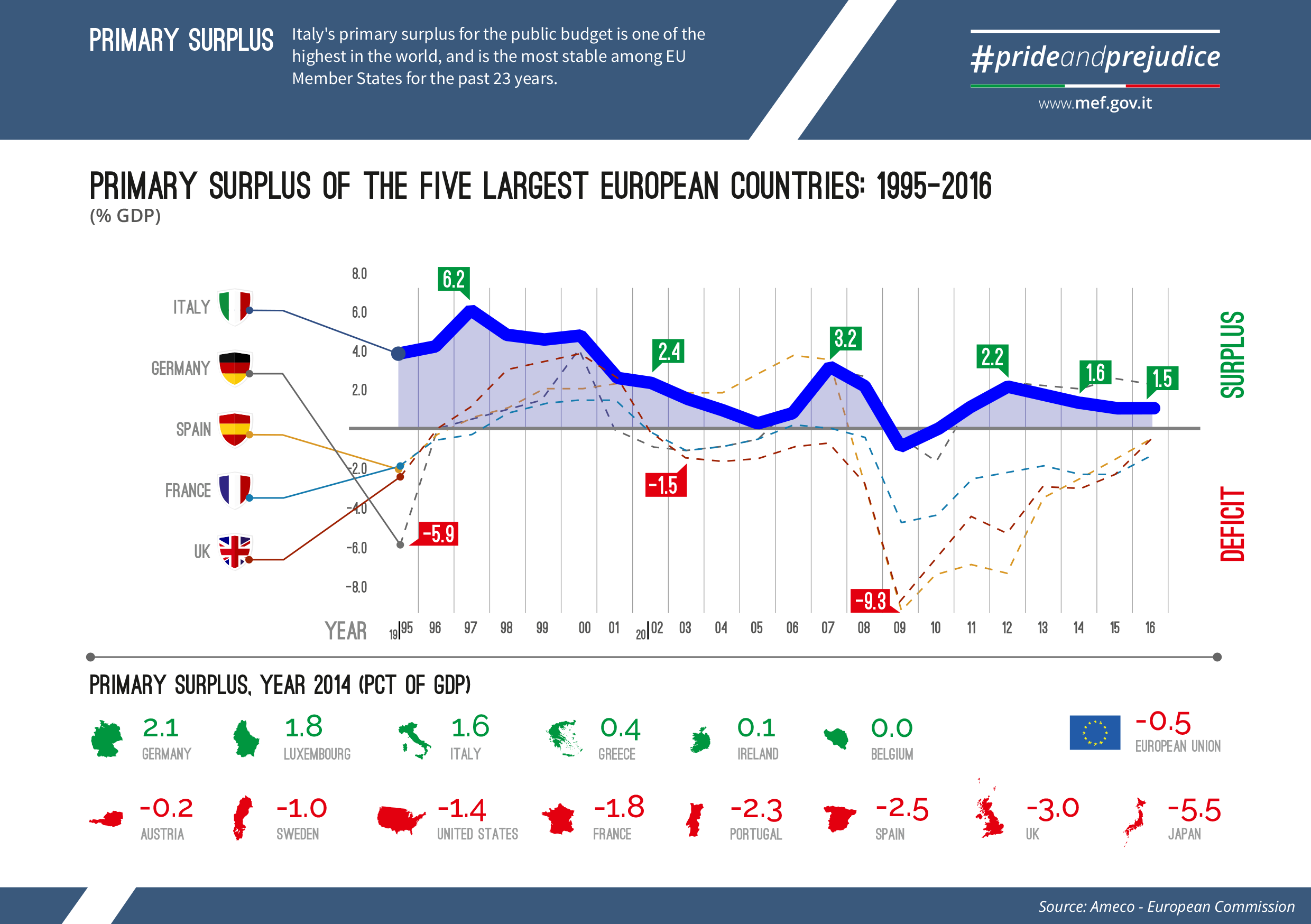 As already evident in the primary balance, the rigorous approach to responsibly managing the public budget is confirmed by the trend of public spending.
Italy's public expenditure remained almost constant during the years of crisis, whereas other countries logged significant increases, including double-digit increases. 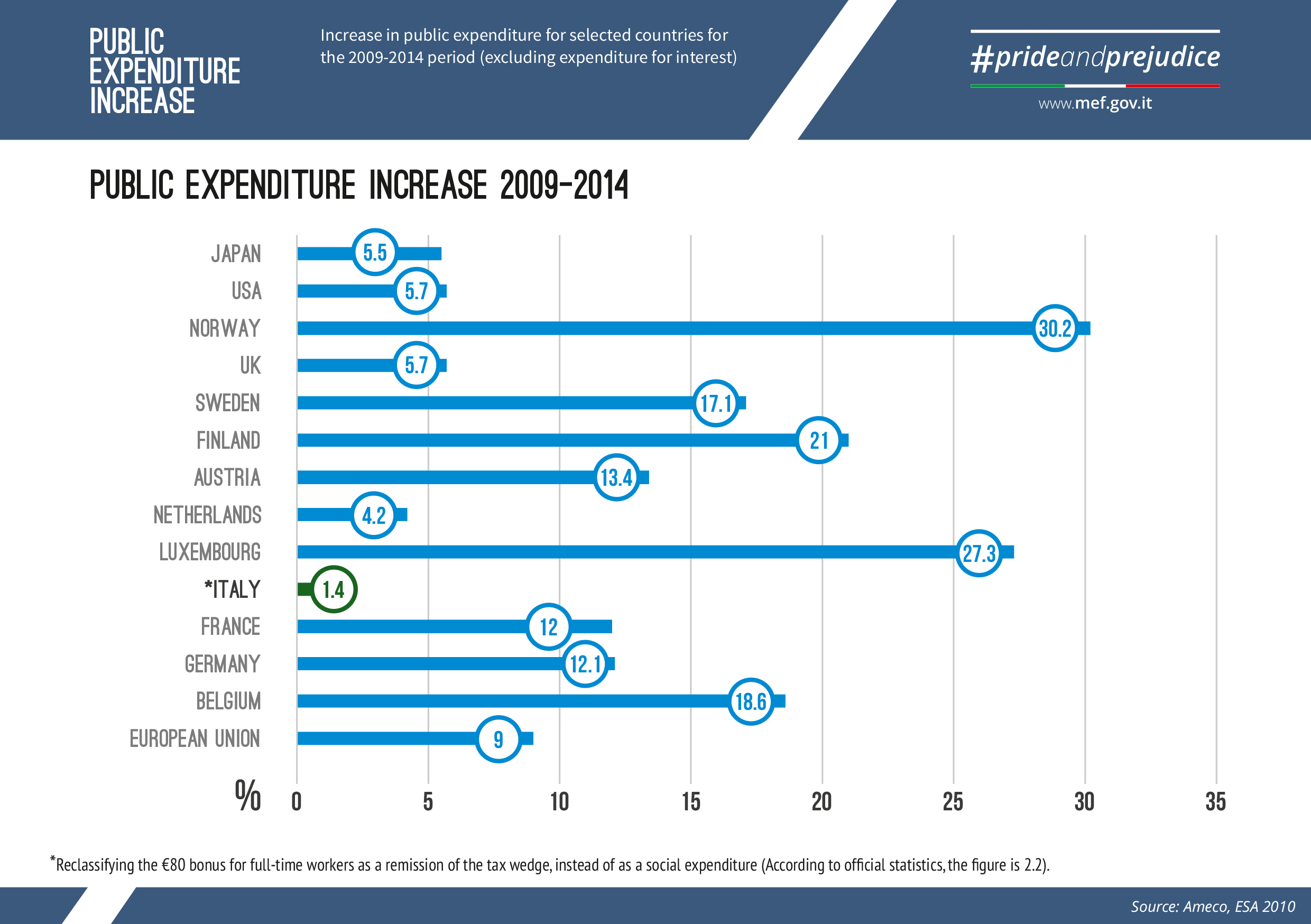 Italy's deficit-to-GDP ratio was below 3% in 2013, as it was in 2012.
The European Commission accordingly closed out the excessive deficit procedure that had been opened in the past.
Again 2014, Italy's public finances met this requisite, as provided by the European treaties applicable to the countries that are part of Monetary Union, and those thus that have adopted the euro as their currency. In 2015, the deficit descended to 2.6% of GDP.
In the Euro Area, Italy is still one of the few countries to have respected this rule.
It is furthermore interesting to note that there are numerous countries outside of the Euro area that have a deficit-to-GDP ratio that is above the 3% level. Those countries included the UK, Japan, and the United States. 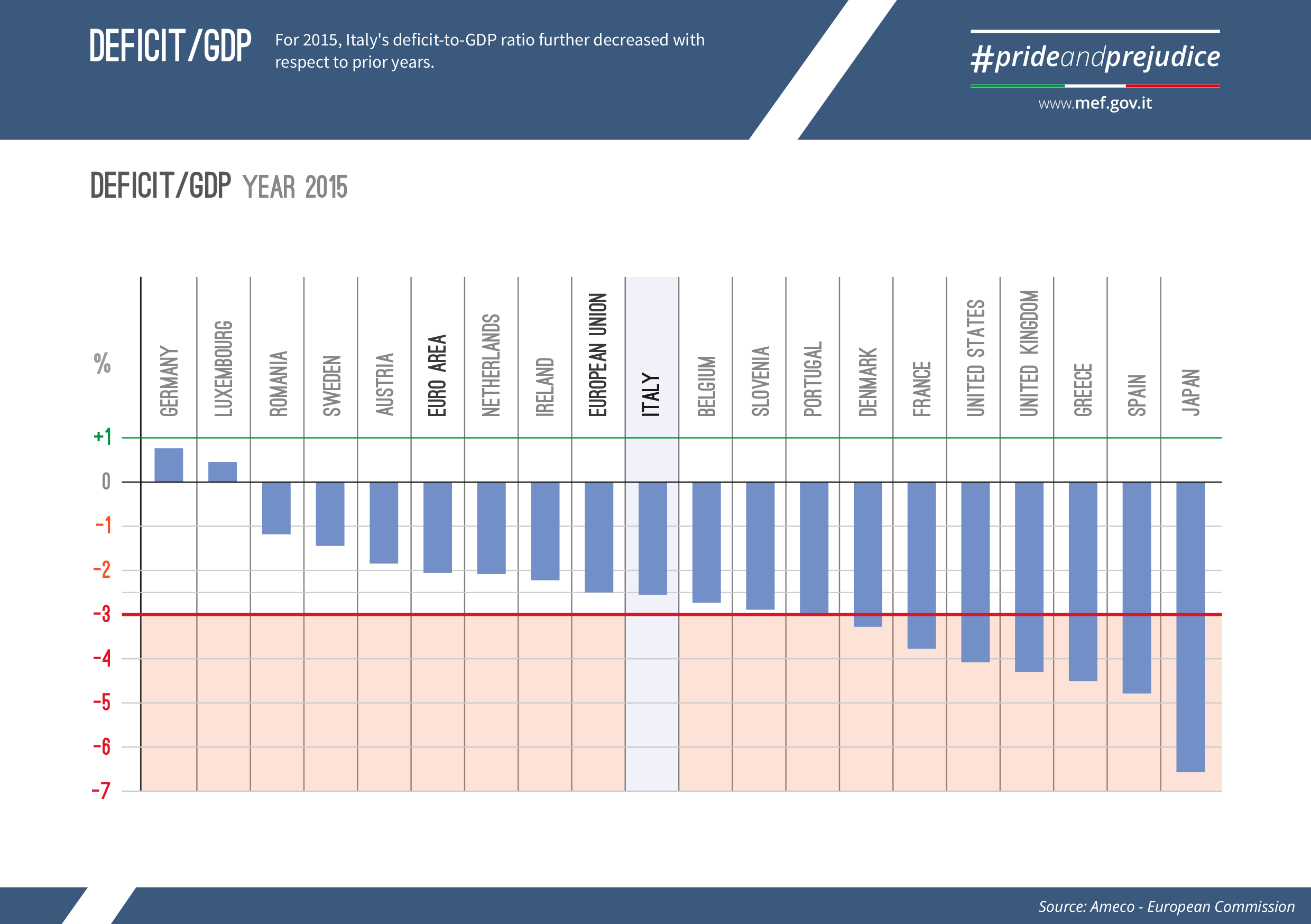 Many countries reacted to the crisis that took shape in 2008 by expanding their public budgets. Between 2008 and 2014, deficit expansion translated into the growth of debt.
It is very clear that the trend of Italy's debt has been much more subdued than in other countries.
Despite Italy's modest economic growth during the years of the crisis, the increase in Italy's debt was well below the average for both the EU countries, and the Euro Area countries.
As a result of economic growth and a plan now being implemented to divest State properties, Italy's debt-to-GDP ratio has stabilised and will start declining in 2016. 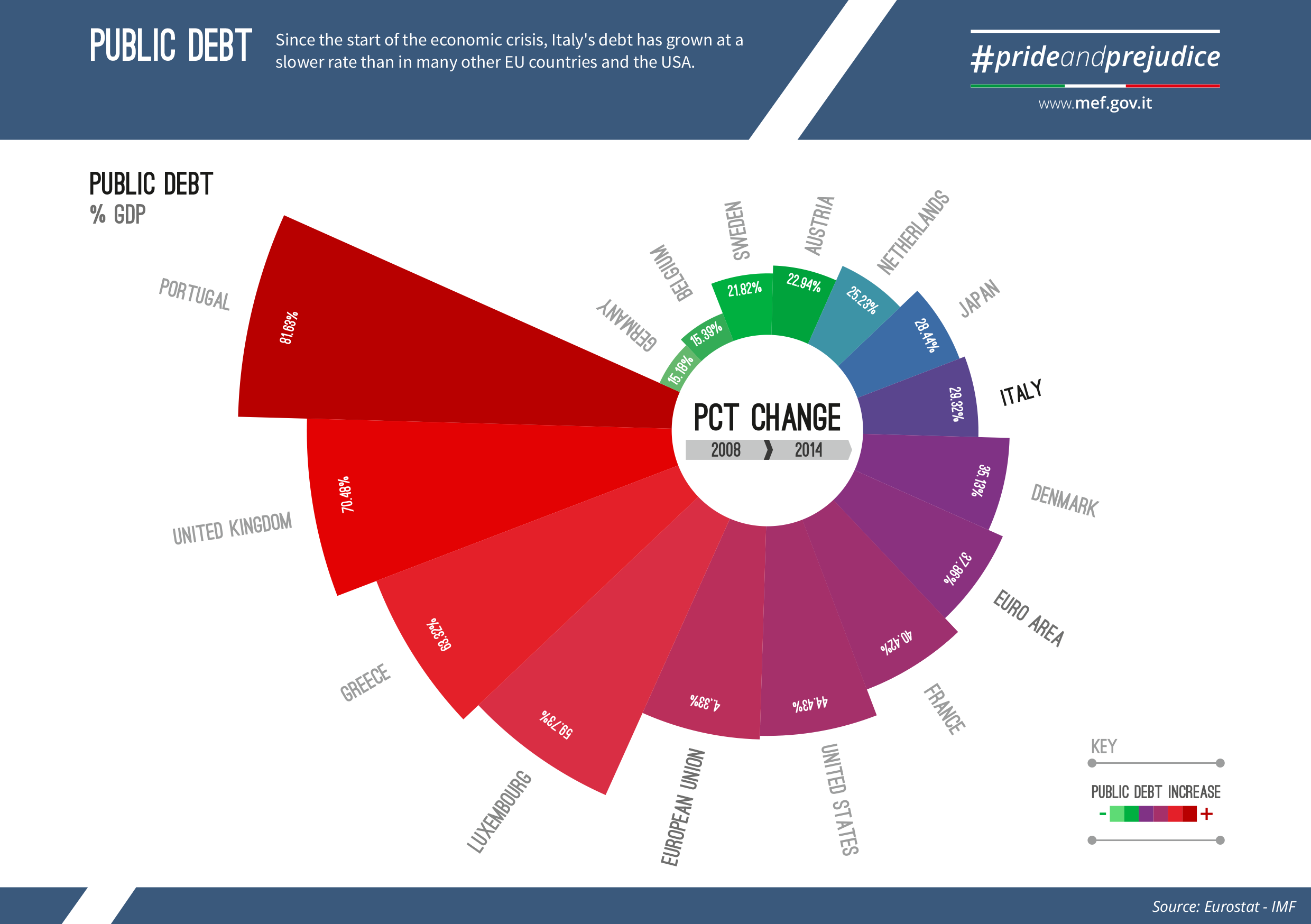 After 8 years of uninterrupted growth, the public debt-to-GDP ratio was essentially stabilised in 2015 and is slated to fall as from 2016.
As of 2019, the ratio will decline to below the 120 per cent threshold. The turnaround in the trend of the debt, which is key to the government's strategy, must be achieved with responsible management of the state budget, with the maintenance of the primary surplus and the growth of GDP. 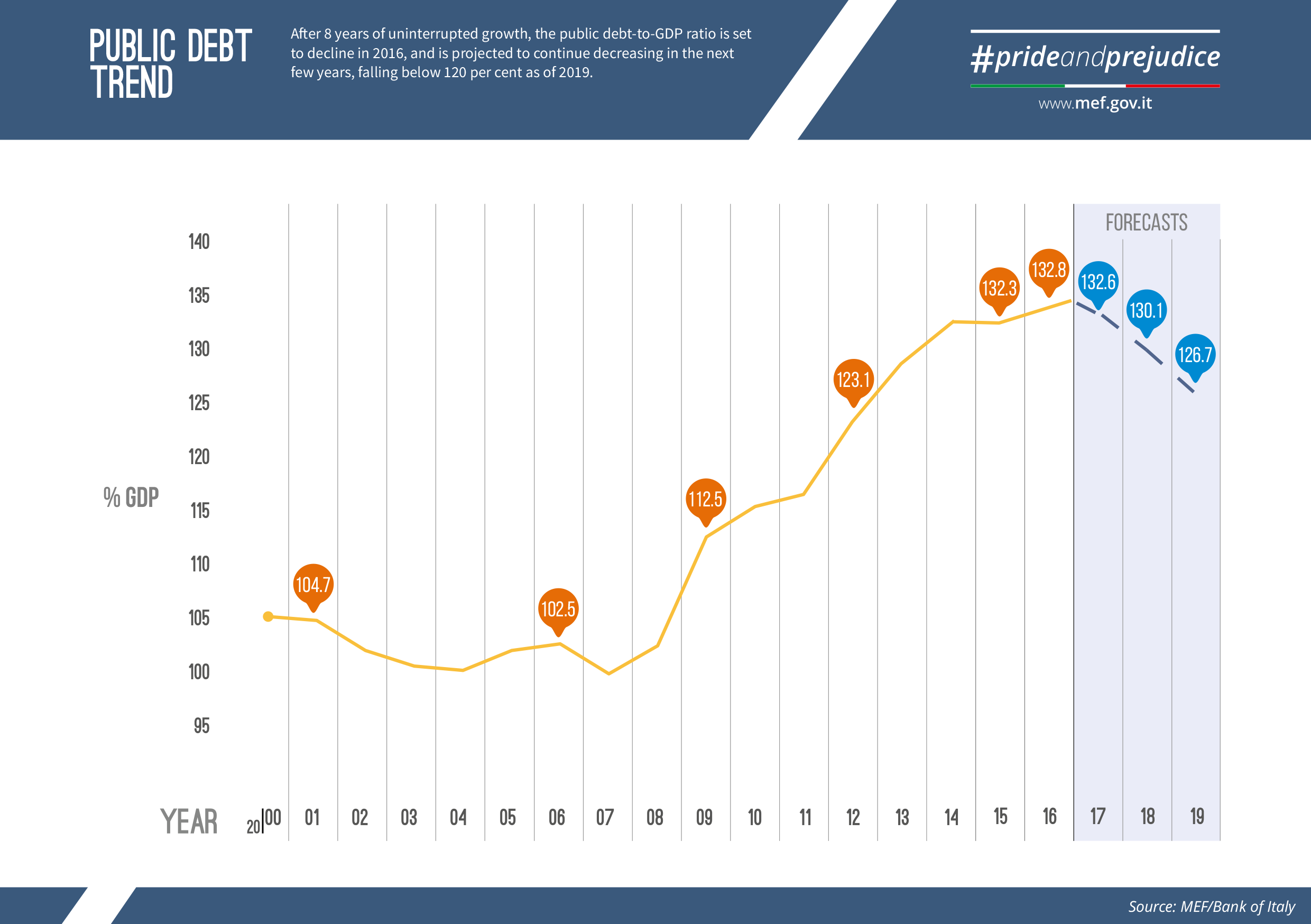 The European Commission's analysis of the sustainability1 of the economies in the Euro Area looks at the risk of Italy falling below the Euro Area average and the EU-27 in the short, medium and long term2.
According to the Commission's analysis, Italy's public debt is among the most sustainable in Europe over the long term. The S2 indicator (long term) is equal to -2.1 against an EU average of 1.7 and a Euro Area average of 0,83.

(1) Sustainability is defined as the difference between the structural budget position and the sustainable budget position.
(2) The analysis referenced in the graph regards 17 countries, considering the previous entry of Latvia and Lithuania in the EU.
(3) In order to interpret the indicator correctly, it is worth noting that as its value increases, the fiscal adjustment needed to reduce sustainability risk also increases. A negative S2 value, as in Italy's case, indicates sustainability of the public finances in given scenarios, without further adjustments. The shortand medium-term sustainability indicators also place Italy among the countries with the most sustainable public finances. 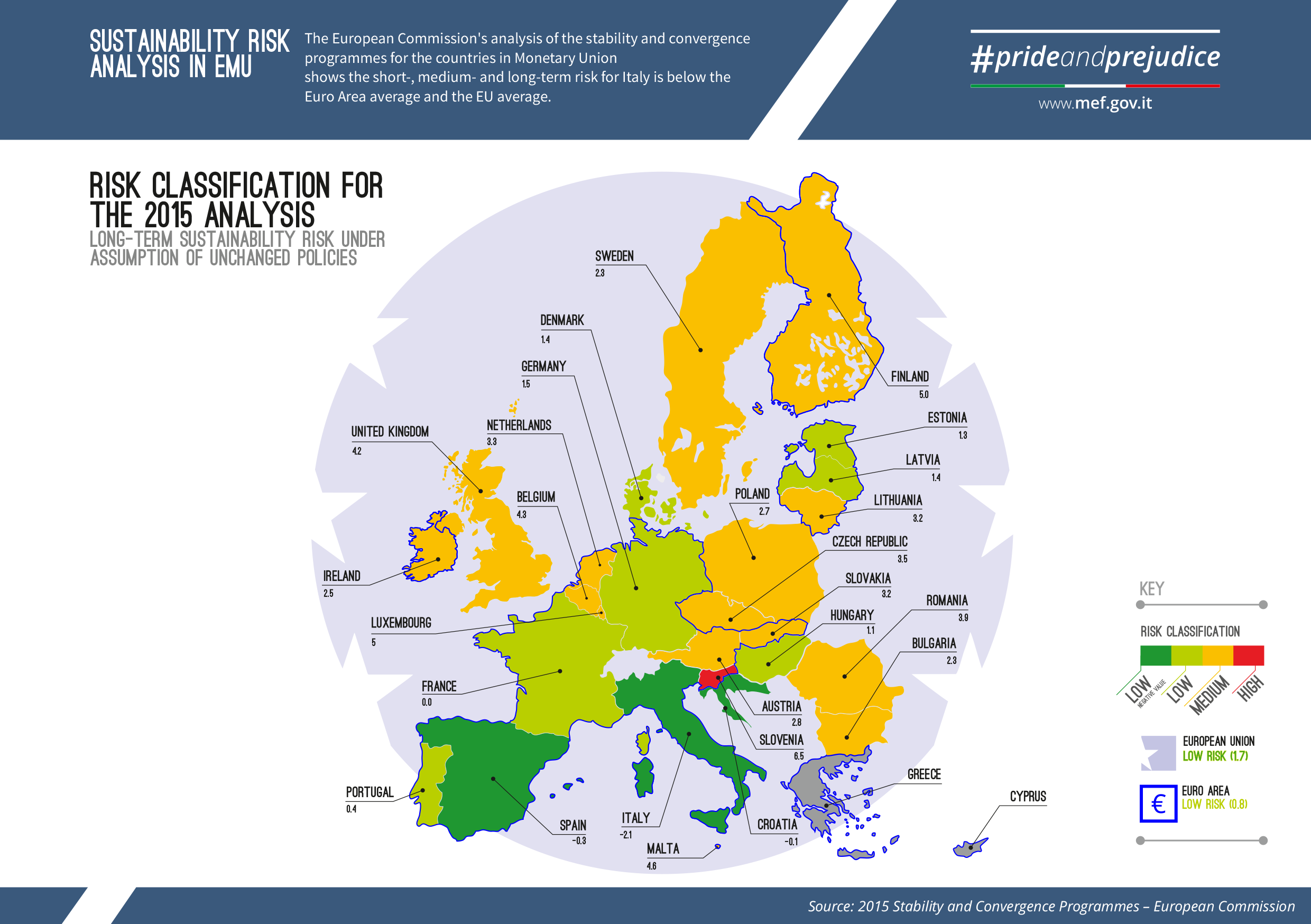 During the economic crisis (2007- 2014), the national banking and financial systems of the 17 Euro Area countries received state aid, but with important differences.
During the years of the crisis, Italian banks received state aid amounting to approximately € 4 billion. This compares with almost € 262 billion for the German banks, and € 207 billion for the British banks.
In one year, the total amount of aid within the European Union went from approximately € 681 billion to € 656 billion according to Eurostat. Of this amount, aid granted in the Euro Area decreased from € 511.7 billion to € 492.4 billion.
In Italy's case, the exposure went from approximately € 4 billion to the € 1.1 billion today. 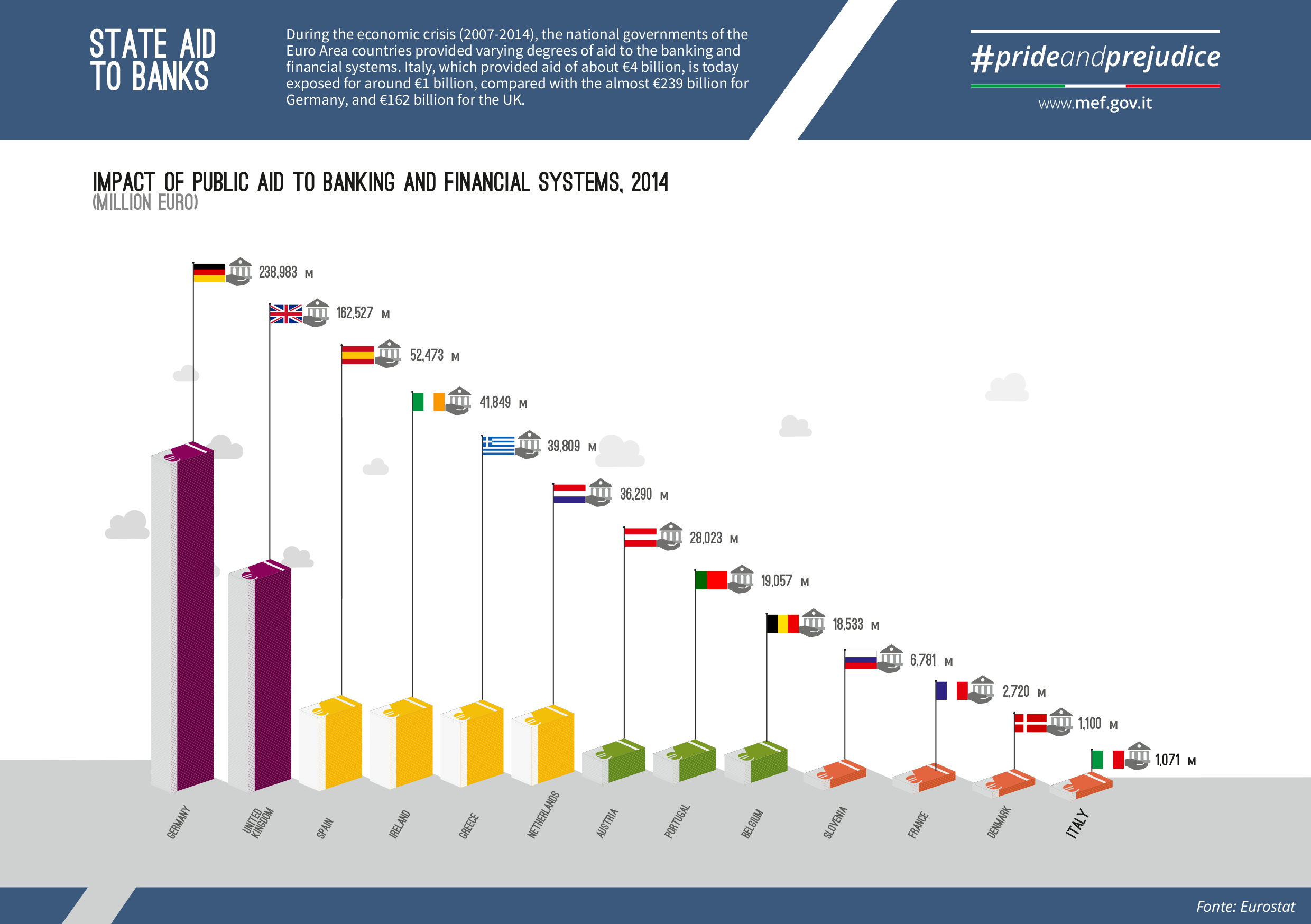