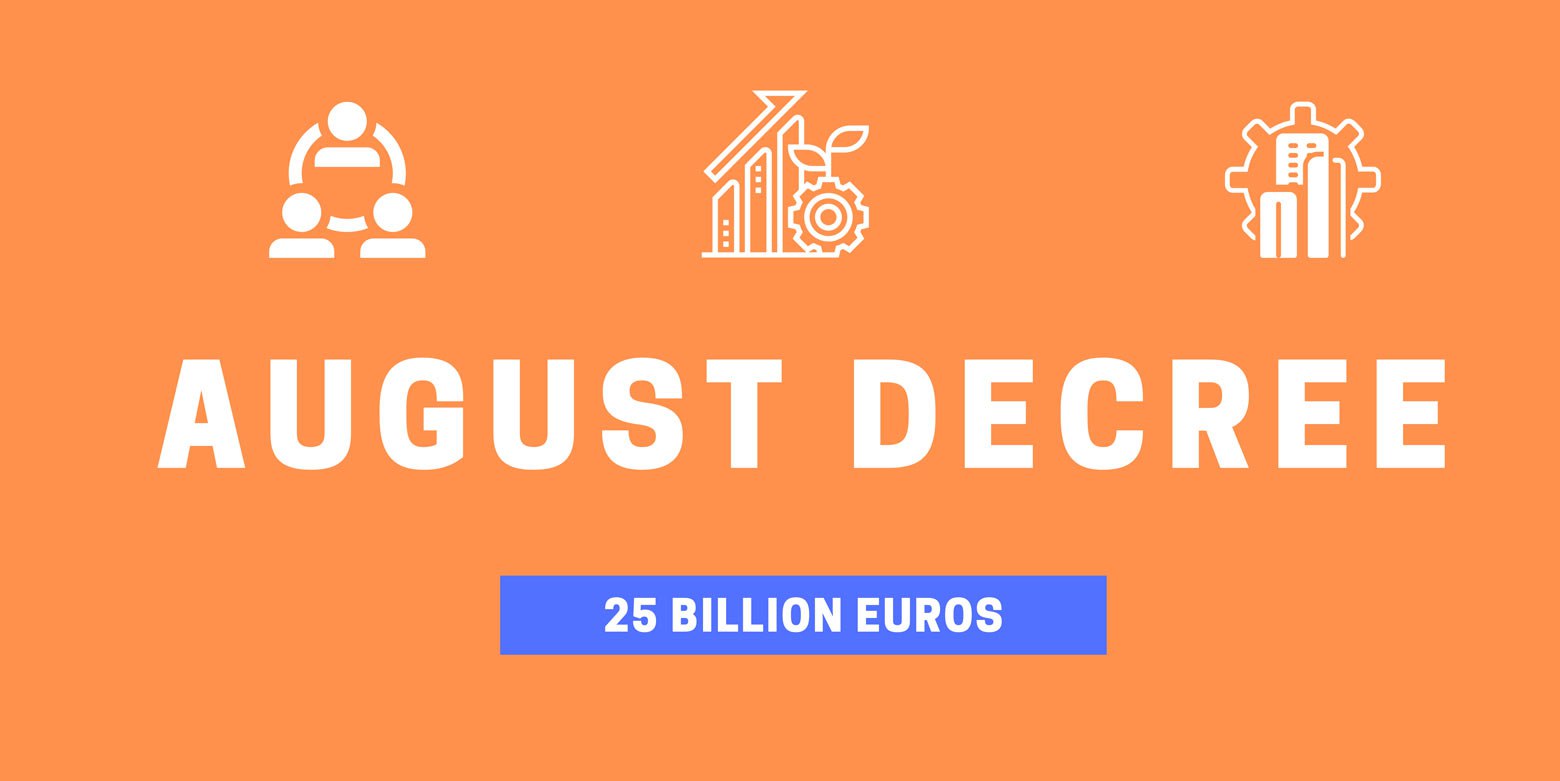 Rome, August 26th 2020 – Work and businesses, taxes and liquidity, support for local authorities and the health service, resources for southern Italy and ensuring that schools can open again safely: general and sector-specific measures to help the country recover. The Italian government is continuing to take action to combat the economic consequences of the Covid-19 emergency, setting aside an additional € 25 billion.

Following the 'August' Decree, published in the ‘Gazzetta Ufficiale’ (Official Journal of the Italian Republic), the total resources allocated to date in response to the emergency amount to € 100 billion, in terms of higher indebtedness, equal to 6 percentage points of GDP. This represents one of the largest efforts in the world, in terms of size and scope, defending Italy's production capacity and limiting the drop in GDP as well as mitigating the other economic and social effects of the pandemic.

In fact, the measures taken by the government in response to the Covid-19 emergency have immediately aimed at ensuring Italy's economic and social stability, supporting employment, guaranteeing families’ incomes and living conditions and expanding social safeguards, all in order to take the burden of the emergency off the shoulders of the most vulnerable.

At the same time, increasingly focused efforts have been made to get Italy moving again, combining economic recovery, social cohesion and safety. There has been an immense commitment to strengthening Italian companies, protecting them against the economic consequences of the emergency at the same time as looking towards the future, competitiveness and the Italian economy's role in the global scenario. The aim of these measures is to guarantee a recovery characterised by investments, innovation, growth and environmental and social sustainability, introducing new tools to protect and strengthen Italy's industrial structure.

As part of this recovery strategy, the August Decree also continues to support the healthcare sector, which has allowed Italy to quickly react to the pandemic; in fact, the health service will receive significant funding to cut down waiting lists and pursue new research projects to fight the virus. Furthermore, approximately € 1 billion will be allocated to schools over the two-year period, in addition to the resources already provided, ensuring that they are well equipped to begin the new school year.

Some of the worker support measures introduced by previous government measures are being extended and strengthened. Social security relief for disadvantaged areas has also been introduced, together with new, specific indemnities for a number of sectors, while incentives to hire permanent workers have also been implemented.

Firstly, in order to limit the epidemic's extraordinary effects on employment, a historic measure has been introduced that aims to stimulate growth and employment for enterprises in disadvantaged areas following the crisis, with a particular focus on southern Italy: a 30% relief on the pension contributions that companies must pay to all employees.

The ‘cassa integrazione ordinaria’ (standard fund to supplement earnings), ‘assegno ordinario’ (standard allowance) and the ‘cassa integrazione in deroga’ (exceptional fund to supplement earnings) for the Covid-19 emergency are being extended for a maximum of eighteen weeks overall. For the first nine weeks, this extension will be granted to employers that have suspended or reduced their level of work following the health emergency; for the nine weeks after, companies will be expected to pay an additional contribution, calculated based on their turnover (9% if they have recorded a loss of less than 20%, and 18% if they have not recorded any losses); any employers that have recorded a reduction in turnover of 20% or more will be exempt from this additional contribution.

Any companies that have already used these earnings supplement schemes and do not ask to extend them shall be entitled to an exemption from paying their respective social security contributions, for a maximum of four months, up to 31 December 2020. Up until that date, companies that hire employees on a permanent basis will also be excluded from paying social security contributions, for a maximum of six months from when the employees are hired, as long as this leads to an increase in net employment.

Employers that have not fully benefited from the special Covid fund to supplement earnings, or from the social security contribution exemption, are precluded from starting individual dismissal procedures and those initiated after 23 February 2020 will remain suspended. Collective dismissal procedures shall nonetheless remain suspended. These suspensions do not apply in the event of dismissals caused by companies definitively ceasing to operate.

Up until 31 December 2020, without prejudice to the maximum overall duration of 24 months, it is possible to renew or extend fixed-term employment contracts, even without reason, for a maximum of 12 months and only once.

An additional € 400 in ‘Emergency Income’ will also be paid to the families most in need.

In addition to the indemnities already introduced by the government’s previous measures, new indemnities are also being implemented for certain categories of workers. More specifically, an indemnity of € 1,000 has been introduced for seasonal workers in the tourism, spa and entertainment industries, which have been badly affected by the Covid-19 epidemiological emergency, and to other categories of workers, including members of the ‘entertainment workers' pension fund’ who meet certain requirements, seasonal employees other than those working in tourist and spa establishments, intermittent workers and door-to-door sales people. In addition, a € 600 indemnity is available for seafarers and seasonal sports workers. The indemnity for self-employed workers and professionals registered with compulsory private pension providers will automatically be paid also for the month of May 2020 and will be increased to € 1,000.

The 'New Skills Fund', introduced by the so-called 'Relaunch Decree’, will be increased to € 500 million for the 2020-21 two-year period. This fund is dedicated to redefining working times, through trade union agreements and keeping the same overall hours and salaries, in order to encourage training and the redeployment of workers.

SUPPORT FOR THE ECONOMY

The August Decree has also allocated additional funds to finance a series of measures aimed at continuing and strengthening support for economic and productive activities, already implemented by the previous decrees, with a particular focus on the tourism, catering and culture industries.

€ 600 million has been set aside to support catering businesses whose turnover between March and June 2020 was three quarters less than the turnover recorded during the same period in 2019; to this end, a non-refundable grant will be offered for the purchase of Italian agricultural products, food and wine. 90% of this grant will be paid in advance upon acceptance of the application.

€ 500 million is being set aside to provide non-refundable grants to those working in the tourism industry in Italy's historic centres who have recorded a significant drop in foreign tourists and who, in June 2020, recorded a turnover of less than two-thirds that of the same month in 2019; a minimum of € 1,000 will go to natural persons and € 2,000 to other entities meeting these requirements.

In addition, a number of business support tools are also being refinanced: the 'Nuova Sabatini’ (for € 64 million), development contracts (for € 500 million), the ‘Fund to safeguard employment levels and the continuation of business activities’ (€ 200 million), the ‘Innovation voucher’ (€ 50 million), and the ‘Ipcei Fund’ to support companies that contribute to the implementation of important projects of European interest (€ 950 million).

The ‘Guarantee Fund for small and medium enterprises’ is also being refinanced for a total of € 7.8 billion (for the 2023-25 three-year period); this refinancing will provide the necessary resources for the fund to be fully operational, allowing it to continue facilitating access to credit for SMEs by granting a public guarantee.

The moratorium on loans and mortgages for SMEs, introduced by the ‘Cure Italy’ decree has been extended: this was originally set to expire on 30 September 2020, but has now been extended until 31 January 2021, and until 31 March 2021 for companies working in the tourism industry.

The Fund for state incentives has been increased by € 500 million; this fund is for those who buy and register cars with low CO2 emissions in Italy and is designed to support the recovery of the automotive industry, while encouraging the development of new technology.

A total of € 1.5 billion has been set aside to strengthen the capital of state-controlled companies, through share capital increases or alternative forms of capitalisation, with the aim of supporting their solidity and their plans to recover and further develop.

The tool represented by alternative individual savings plans has also been strengthened, with the tax-free annual investment threshold rising from € 150,000 to € 300,000 for long-term investments.

The Fund established by the ‘Relaunch Decree’ to support travel agencies, tour operators and tourist guides has been increased by € 265 million for 2020.

For 2020 and 2021, the tax credit available for redevelopment and improvement expenses incurred by companies working in the tourism, hospitality and spa industries, including holiday farms and campsites, will increase from 30% to 65% of the investments made, with € 180 million being set aside per year in 2020 and 2021.

The ‘Enterprise and cultural institutions emergency fund’ introduced by the Relaunch Decree has been increased up to € 231.5 million, and the ‘Cinema, entertainment and audiovisual sector emergency fund’, introduced by the Cure Italy Decree, has been increased to € 335 million. A total of € 90 million is going towards museums and the implementation of measures as part of the strategic plan entitled ‘Major Cultural Heritage Projects’.

An incentive for advertising investments is also being introduced for professional sports leagues and clubs and for amateur sports clubs and associations; a total of € 90 million is being set aside for this purpose, in the form of a tax credit equal to 50% of the investments made between 1 July and 31 December 2020.

A total of approximately € 200 million is being set aside to strengthen the resources available to support various transport activities, including taxis and car & driver hire services, road haulage, tourist buses and passenger and cruise services.

Various tax measures have been adopted, which aim to provide additional and substantial support for the liquidity of households and businesses. In particular, the deadlines for paying taxes and social security contributions that were suspended during the emergency phase have been rescheduled, significantly reducing the burden for 2020 that would otherwise have fallen on the shoulders of struggling taxpayers.

Payments postponed for ‘Isa’ taxpayers and those belonging to the ‘regime forfettario’ (flat-rate tax regime) who have suffered a drop in turnover or fees of at least 33% in the first half of 2020 compared with the same period of 2019: for these individuals, the payment deadline for the second or single instalment of their advance on income taxes and IRAP (regional income tax) has been extended until 30 April 2021.

Furthermore, the collection service will not be resumed until a later date: the suspension of the payment deadlines stated by tax demands and enforcement notices for tax revenues has been postponed from 31 August to 15 October 2020.

For 2020, the limit on the value of assets that may be transferred and the services that may be provided by companies to their employees, without contributing to taxable income, has doubled (up to a maximum of € 516).

Firstly, the funds introduced by the Relaunch Decree have been increased, to deal with lower tax revenues, safeguard budget balances and ensure the regularity of public action at all levels of government. In particular:

Additional resources have been allocated:

The August Decree has also extended the deadline to grant liquidity advances for local authorities (from 20 September to 9 October 2020), thereby facilitating payment of the debt stock at 31 December 2019 vis-à-vis companies and benefiting Italy's entire economic system.