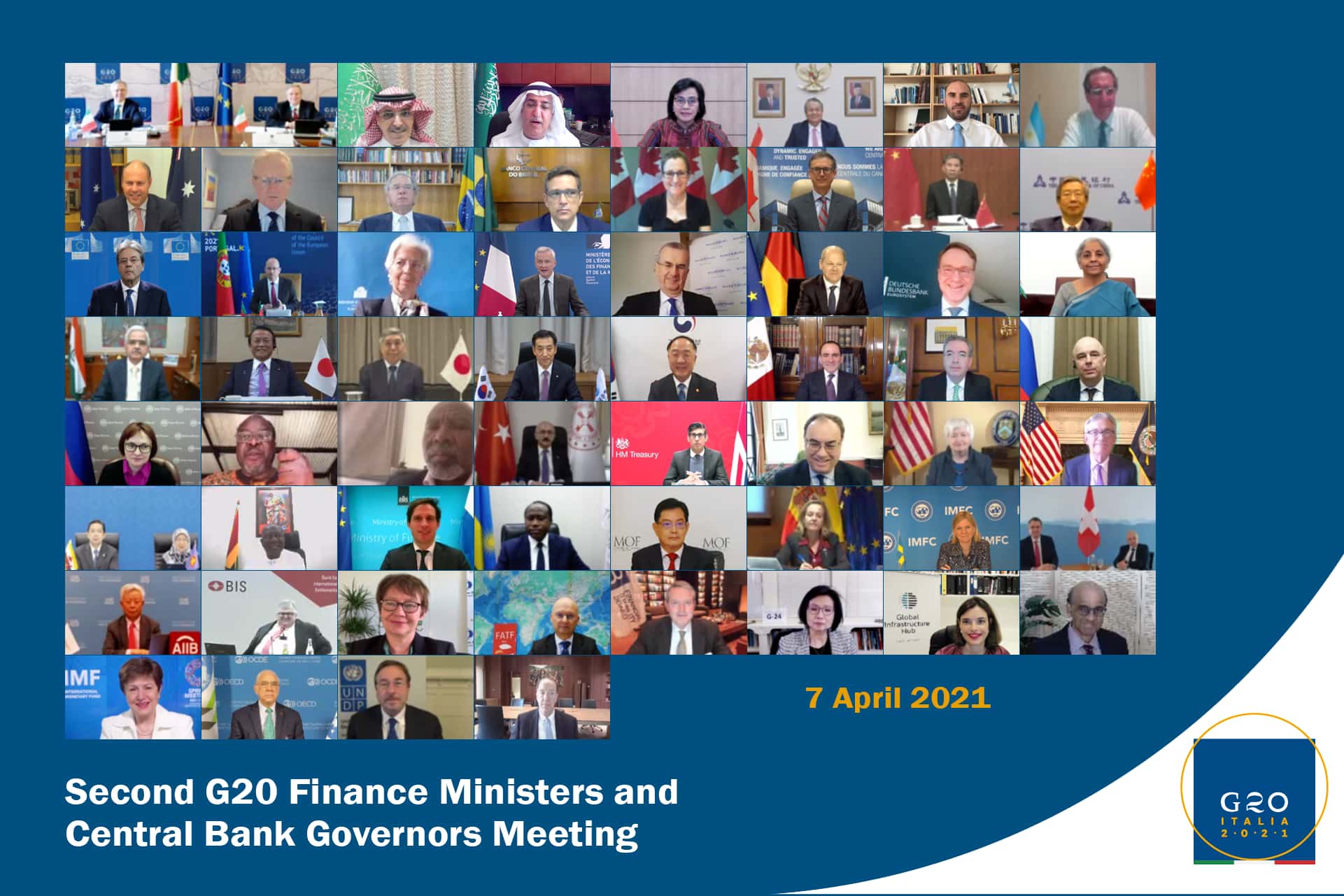 Rome, April 7th 2021 – The G20 Finance Ministers and Central Bank Governors (FMCBG) met on Wednesday, 7 April, for their second official meeting under the Italian G20 Presidency. The meeting, as for the previous G20 FMCBG February meeting, was held in virtual mode.

G20 Ministers and Governors had a very productive exchange of views and agreed on a series of commitments, detailed in the official Communiqué, issued at the end of the meeting.

The discussion spanned from issues covering global economy, efforts to push forward the economic recovery and promoting a more sustainable growth, to the support to the most vulnerable countries, advancements in international taxation matters and financial sector related issues.

G20 Members recognised that after the contraction registered in 2020, the global outlook has improved, mainly due to the roll out of vaccination campaigns and continued policy support. Nonetheless, the recovery appears clouded by uncertainty and uneven across and within countries.

Against this background, Ministers and Governors renewed their commitment to avoiding any premature withdrawal of support measures. In particular, they have reaffirmed the willingness to use all available policy tools for as long as required to protect people's lives, jobs and incomes; and address the long-lasting scars of the pandemic on the most affected groups of the society.

The Members also agreed on the update of the G20 Action Plan, to reflect recent changes in the economic and health outlook. The update includes a set of commitments to steer the global economy out of this crisis, tackle current global challenges and enhance resilience against future ones. Among these challenges, addressing climate change and promoting environmental protection have been recognized as increasingly urgent.

Indeed, climate change has become a cross-cutting priority across all Finance Track activities. The dialogue on climate policy action will continue throughout the year and will be taken forward at the high-level Conference on Climate, to be held in July at the next G20 Ministerial meeting in Venice.

The discussion touch also upon the work of the Sustainable Finance Study Group, which was reactivated on the initiative of the Italian Presidency and is now co-chaired by China and the United States. The Group made rapid progress in the last weeks and is tasked to develop a multi-year roadmap on sustainable finance to address the most pressing issues related to sustainable development. Ministers and Governors concurred on the importance of this agenda and agreed that the Study Group will be upgraded to a fully-fledged Working Group.

At the centre of today’s discussion was also the support the most vulnerable countries. Following several initiatives adopted by the international community to help addressing the immediate liquidity needs of these countries, the G20 called on the IMF to make a proposal for a new Special Drawing Rights (SDR) general allocation of USD 650 billion to meet the long-term global need to supplement reserve assets. Ministers and Governors also agreed on a final extension of the Debt Service Suspension Initiative (DSSI) by 6 months through end-December 2021.

The Finance Track reaffirmed its willingness to continue cooperating for a fair, sustainable, and modern international tax system. Following up on their last meeting, Ministers and Governors are committed to reaching global and consensus-based solutions on the global taxation agenda by mid-2021.

As concerns financial regulation, Ministers and Governors discussed two documents delivered by the Financial Stability Board. The first on the COVID-19 support measures and the main issues concerning their future evolution, and the second, on the final evaluation report on the effects of too-big-to-fail reforms. They agreed to work to fill some remaining gaps, concerning the information available to public authorities for financial stability risk monitoring and some obstacles to resolvability.

Finally, Ministers and Governors concurred on the need for a system-wide approach to monitor risks that have moved outside the banking system.

The work on all the above issues will continue in the Finance Track Working Groups and will feed the agenda of the 3rd G20 Finance Ministers and Central Banks Governors meeting to be held on 9-10 July in Venice.