The Italian economic response to the Covid-19 outbreak
March 19, 2020

Rome, March 19, 2020 – On March 16th the Italian Government presented a 25-billion-euro package (accounting for 20 billion of net borrowing, 1.1% of GDP) as an immediate response to the COVID-19 outbreak in order to strengthen the Italian health care system and support companies, workers, and families. The aim is to protect citizens’ health, support businesses, and preserve employment levels and incomes. The Government will step up its intervention to tackle the unfolding of the crisis.

The four pillars of the package are: 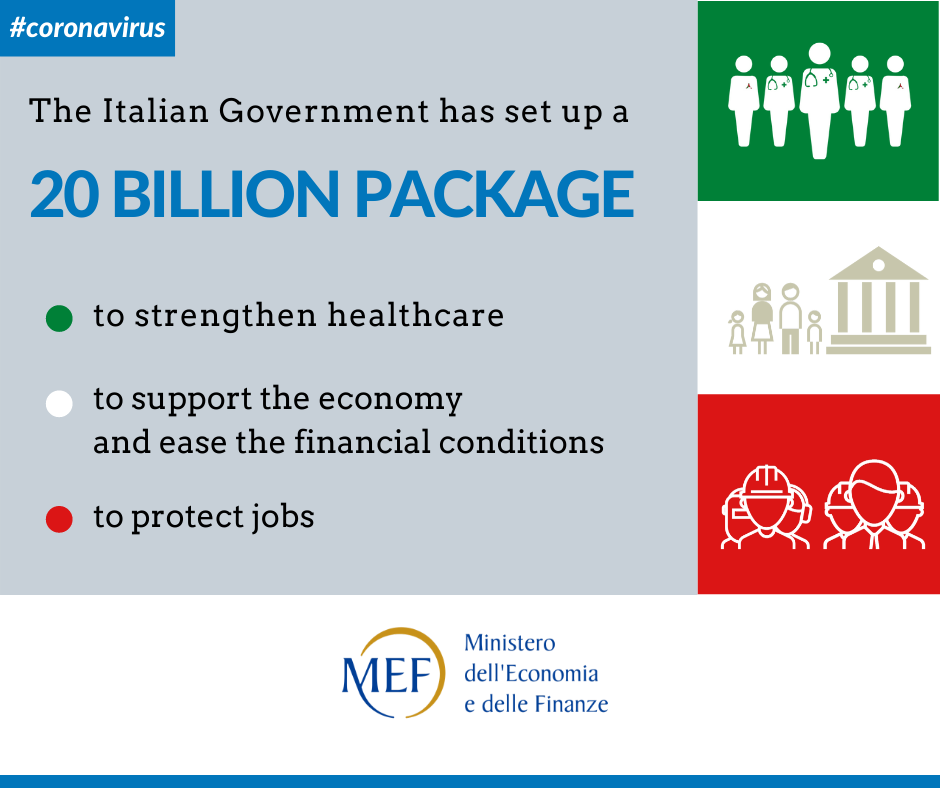 The Government has mobilized all the needed resources to ensure staffing and tools for the health care system, the civil protection department and law enforcement bodies in order to assist people affected by the disease and prevent, mitigate and contain the epidemic.

More specifically, the Government will proceed immediately to hire medical and nursing personnel to reinforce the units of the military health care services, and to involve the private hospitals. Rules have been introduced to allow, if necessary, the requisition of private facilities and properties in order to enhance medical facilities and health care networks across the country.

The Government has also streamlined the purchasing procedures for medical protection equipment. This allowed, among other results, the timely acquisition of 5000 assisted ventilation equipment and millions protective masks. Delivery of such devices is currently in progress and will be completed within 45 days. 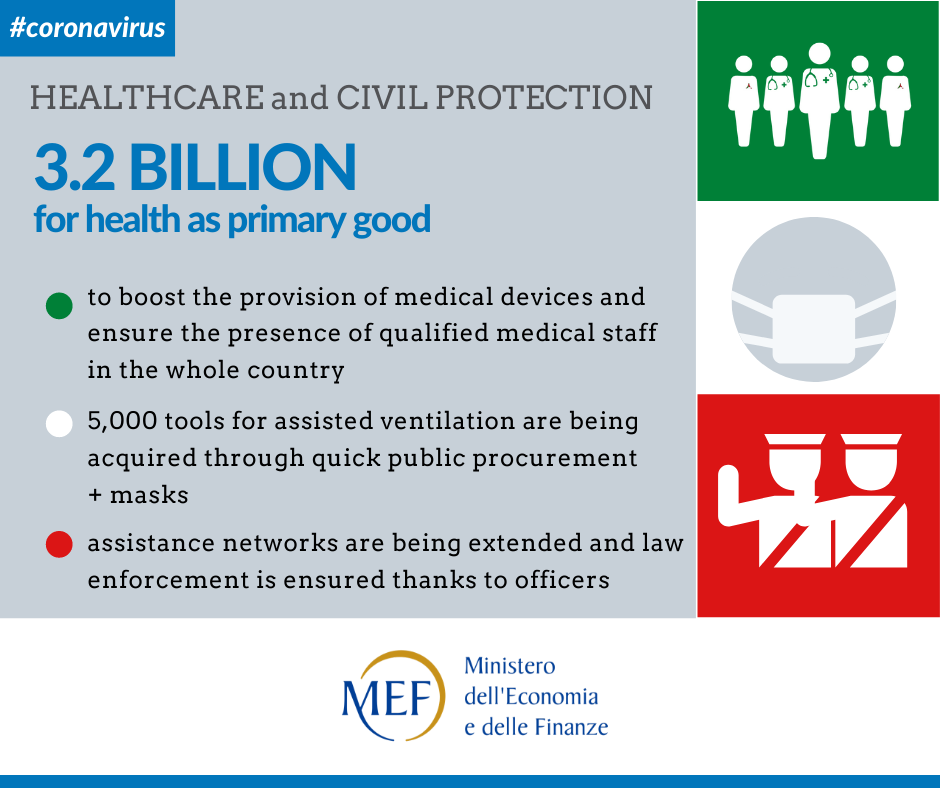 Preserving jobs and incomes is crucial to shield families and businesses from the economic consequences of the coronavirus pandemic.

To this end, the Government has allocated 10.3 billion euros to strengthen social safety net, in particular temporary unemployment benefits for employees in every productive sector, including businesses with less than five employees. The purpose is to keep people in employment and avoid firings due to a temporary crisis. This measure is complemented with an allowance of 600 euro for the month of March for self-employed workers – almost 5 million people who generally do not have access to ordinary social safety nets – and seasonal workers.

Other measures in the package include:

These measures aim to protect workers’ incomes and, at the same time, allow companies to re-organize the workplace to safeguard employees’ health and safety.

Furthermore, on Saturday March 14th, the Government, the trade unions, and the employers’ associations signed a Protocol defining a set of guidelines to ensure the maximum health and safety standards for workers who keep working. This also allows to ensure the application of containment measures on the workplace.

The implementation of the Protocol is expected to minimize the pandemic’s impact on economic activity while ensuring uniform implementation of safety requirements all over the country, as defined by the health authorities. 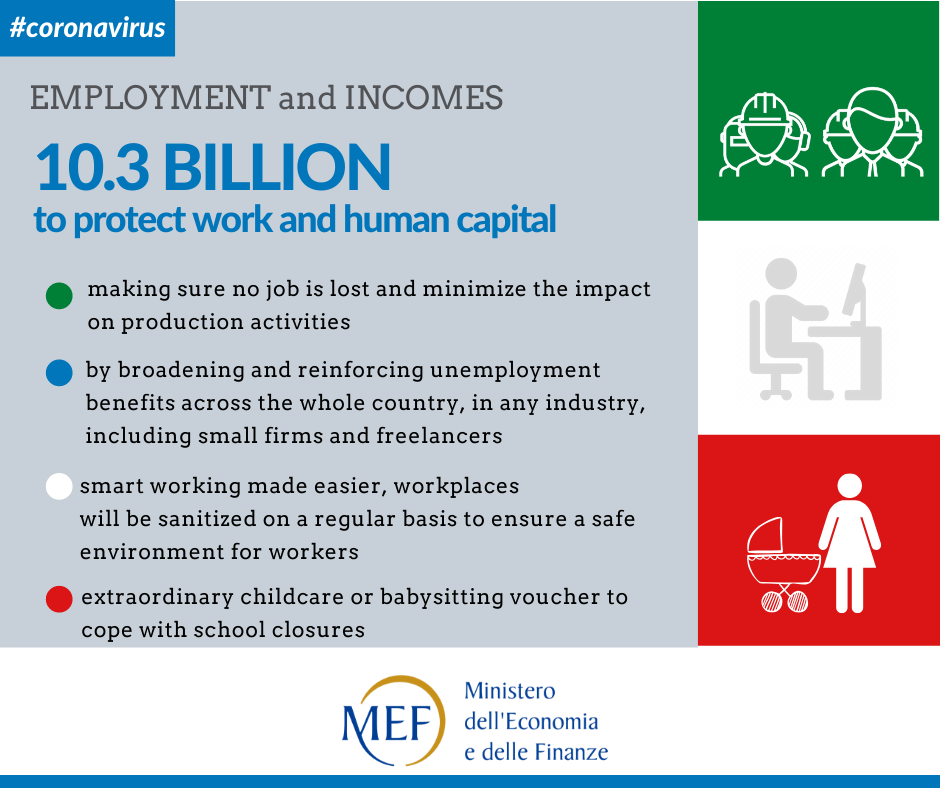 3. Pumping up to 350 billion euro of liquidity to help businesses and households (5.1 billion euro)

The government intends to prevent businesses and families from suffering from a collapse of revenues and a sudden lack of liquidity also caused by the credit crunch, as in the financial crisis of 2007-2008.

To support credit supply the Government’s plan has allocated additional 5.1 billion euro that will leverage credit up to 350 billion euro to professionals and firms, in particular SMEs and MidCaps, and will top up this amount in order to further increase the guaranteed amount of credit for enterprises of any size.

The package consists of the following tools: 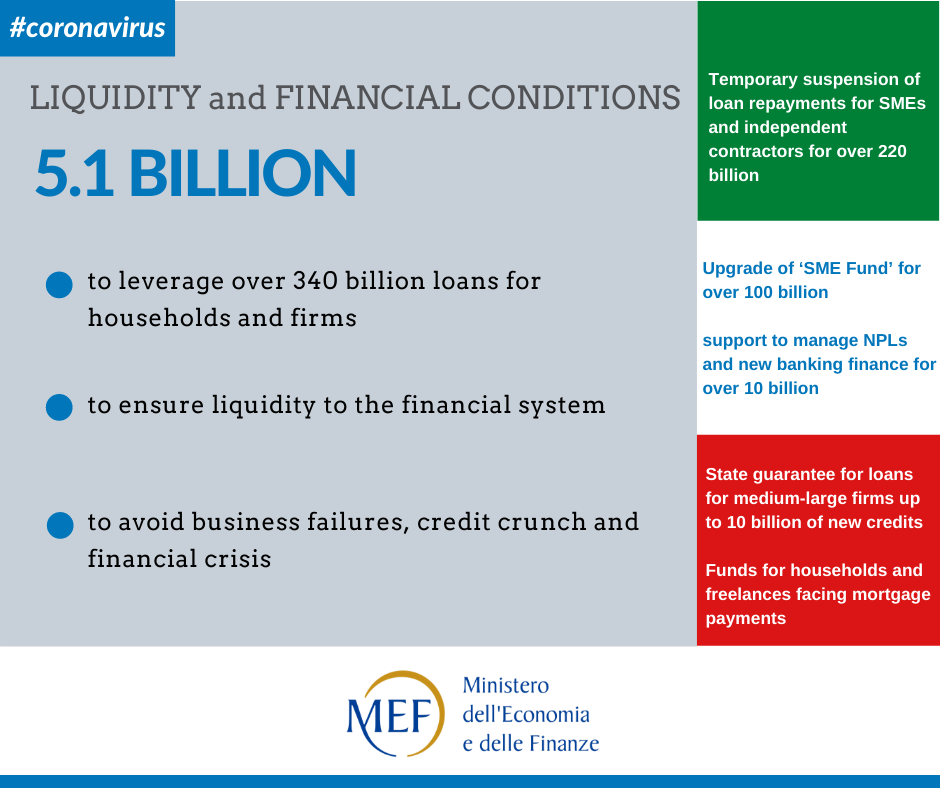 The Government has suspended a number of tax payments to help taxpayers, and introduced tax incentives and credits to support the economy. The key measures included in the law-decree are the following:

Additional measures in support to Central and Local Public Administrations, including Municipalities are worth 4.5 billion euro. 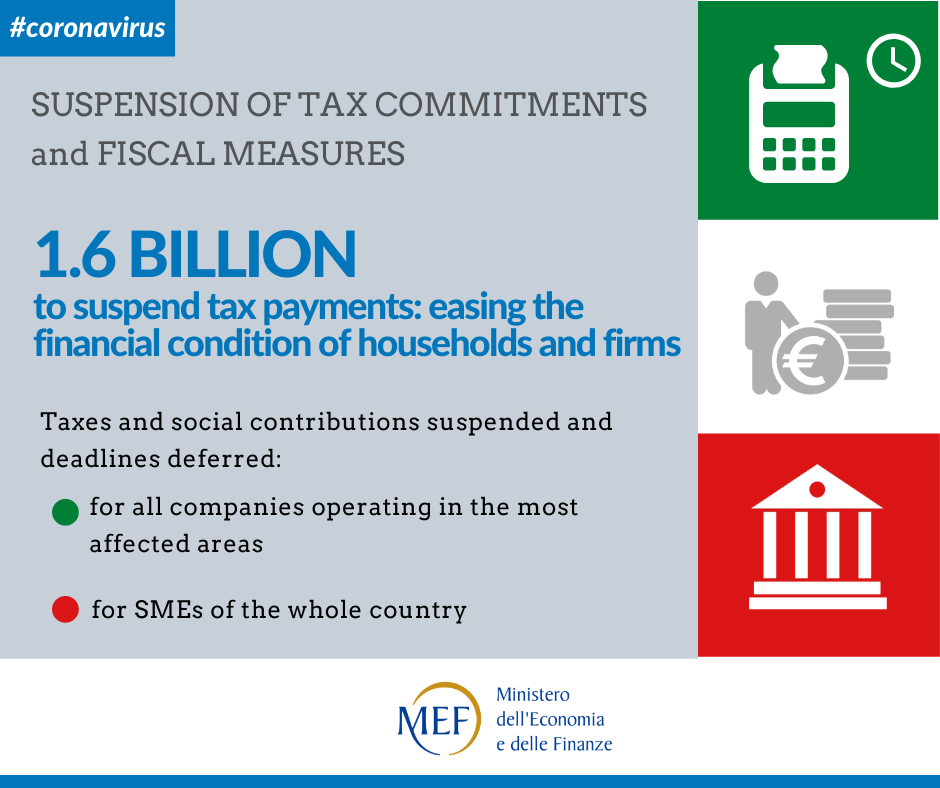 Impact on deficit and on public finance sustainability

The first package will lead to a net borrowing increase of about 1.1 percentage points of GDP (about 20 billion) in 2020 and to a temporary deviation, already authorized in both houses of the Italian Parliament by absolute majority of their components, from the adjustment path towards the medium-term objective.

The overall expenditure, limited to 2020, aims to ensure an increased capability to effectively deal with the extraordinary emergency and they will be treated, due to their nature of one-off expenses, as budget components that do not impact on the structural budget balance, which is a key indicator in national and European fiscal rules.

The temporary nature of this intervention will ensure that public finances sustainability is not jeopardized. The extraordinary intervention decided today is based on solid foundations, as evidenced by the excellent budget results achieved in 2019, with a growth in revenues higher than expected and a drop in net borrowing to 1.6% of GDP. It is the lowest deficit in the last twelve years and more than half a percentage point lower than both the 2018 figure and the forecasts formulated in October for the Draft Budgetary Plan. This is the result of policies implemented to fight against tax evasion and of a rigorous, coherent and credible behaviour of the Government, both on the revenues side and in containing public expenditure.

The debt-to-GDP ratio stabilized in recent years. The larger deficit needed for emergency interventions will probably lead to an increase in the ratio in 2020. In the next Economic and Financial Document, the Government will present a policy scenario consistent not only with a relaunch strategy for the Italian economy, but also with a declining path of the debt-to-GDP ratio in the three-year programming period and on a longer-term horizon. 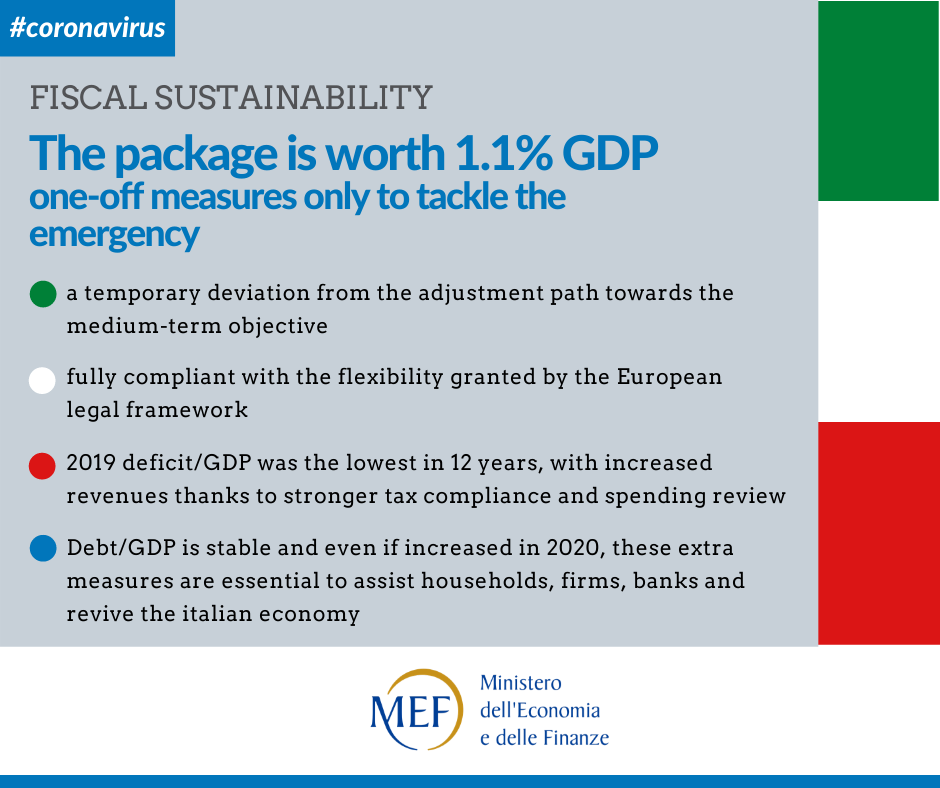 The measures implemented by the Italian Government are compatible with the European regulatory framework, as the European context has declared to be able to adapt existing rules to new needs by exploiting all the current and potential flexibility of the Stability and Growth Pact and by reviewing the State aid framework, revisioning margins and allowing States to act in a resolute and coordinated manner.

The Government is therefore working to ensure the highest degree of coordination and the appropriate level of ambition of the common European response to the Covid-19 crisis. Europe has decided to act and respond swiftly and flexibly to developments as they unfold making use of all instruments necessary to limit the socio-economic consequences of the outbreak. A first set of national as well as common measures have been put together while setting a framework for further actions to respond to developments and to support the economic recovery. In example by making structural funds fully eligible for meeting expenditures to tackle the epidemic crisis. These funds will contribute to the financing of the next package of measures.

Overall, the Government is determined to do whatever it takes to effectively address the current challenges and to restore confidence and support a rapid recovery. Italy was the first country in Europe in which the epidemic spread and will be the first to emerge from the crisis.