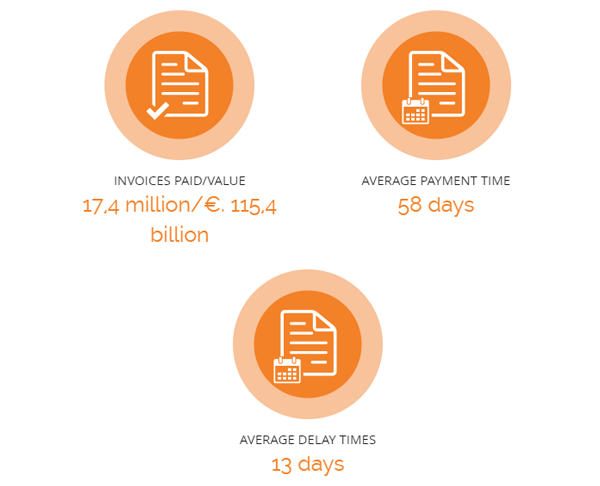 Rome, July 29, 2017 – In 2016 the average settlement period of general government trade receivables was considerably shortened, also thanks electronic invoicing which has been mandatory for all government agencies since its introduction on March 31, 2015. According to data gathered by PCC (Piattaforma dei crediti commerciali – Trade Receivables Platform – developed and managed on behalf of the Ministry of the Economy and Finance by the General Accounting Department), in 2016 general government agencies received 27.3 million invoices for a total of € 157.6 bn, of which €150.4 bn could be paid. 17.3 million of those invoices have been paid, for a total of 111.2 billion, amounting to 74% of the amount considered payable. The actual figure is likely to be even higher, since not all general government agencies registered with the platform immediately notify the system of all the payments that have been made.
The average time taken to settle invoices was 58 days, while the average late payment was 16 days, a 30% decrease compared to the average time taken to settle invoices received in 2015.
The maximum payment term set by the EU Directive is 30 days (extended to 60 days for public entities providing healthcare); on average, the payment deadline is still not being met, but the delay has been considerably shortened. What should also be taken into account is that the average settlement period is affected by both the virtuous behaviour of public entities that make their payments on time, and even ahead of time in some cases, and by the delays that still persist in less virtuous entities.
Check the website of the Ministry of the Economy and Finance for updates of the link (Focus – Italian version) that monitors payments made by general government entities.