Padoan writes to the European Commission on the 2018 adjustment 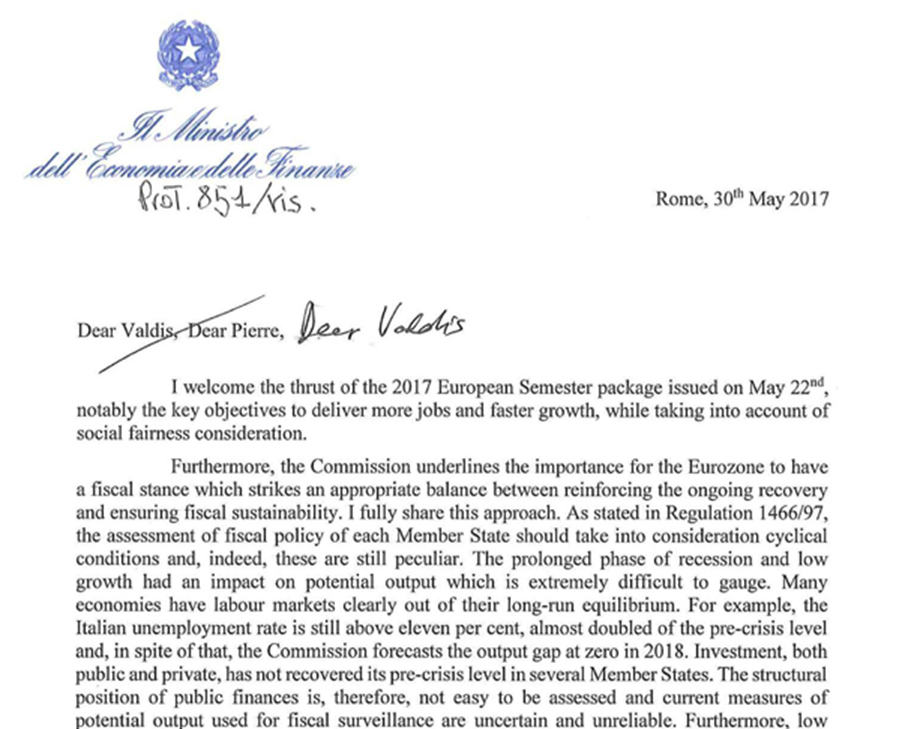 Rome, June 1, 2017 – Recent European Commission recommendations call upon the national governments of the European Union to adopt budgetary policies that will ensure both support for economic recovery and the sustainability of public finances. In the light of these urgings and the specific recommendations addressed to Italy, the Minister of the Economy and Finance has written to Vice-President Valdis Dombrovskis and Commissioner Pierre Moscovici to communicate the extent of the adjustment deemed appropriate to the state of our country’s public finances, taking into account the reform effort that has continued uninterrupted for some years.

In his letter, Minister Padoan points to a structural adjustment of 0.3% of GDP for 2018, which would allow the Italian Government to continue the economic policies that between 2014 and 2017 have ensured a steady reduction in the deficit-to-GDP ratio (0.3% of GDP per year) and the stabilisation of the debt-to-GDP ratio (expected to fall for the current year), while at the same time giving support to the economy that has enabled it to return to growth (passing from 0.1% in 2014 to 0.9% in 2016 and an expected 1.1% in 2017).

The letter also encloses a comparative analysis of Italy's intense fiscal consolidation effort since 2009, which places our country at the top of the list of the virtuous Member States of the European Union. The updated analysis is also published in the specific focus on this website.