Economic and Financial Document - Analyses and Trends in Public Finances

Annexes to the DEF

The 2017 Economic and Financial Document (DEF) is the fifth presented during the current legislature; it offers an opportunity to evaluate past experiences and the results achieved so far, as a basis to guide future economic policy choices. After a profound and lengthy crisis, in 2014 the Italian economy started on a path of gradual recovery which strengthened little by little in the following two years. GDP for 2014 was revised upwards by nearly Euro 10 billion in nominal terms, and 2015 GDP by over 9 billion compared to estimates from a year ago.
This is a more gradual recovery than in previous economic cycles following less deep and prolonged crises, but it is extremely significant, in particular given the boost to the labour market: according to the most recent data available the number of people in work has exceeded by 734,000 the low point reached in September 2013. Partly resulting from the measures included in the Jobs Act, this improvement in labour market conditions saw a drop in the number of inactive people, the unemployment rate and the use of IGC; household consumption has benefited too, growing by 1.3% in 2016, this being an area the government has addressed through various economic policy measures.
Several lines of evidence also indicate a recovery in the competitiveness of the Italian economy, long undermined by a stagnation in productivity that was especially evident in the decade preceding the crisis: in the last two years the trade surplus has reached historically high levels and is among the most substantial in the European Union. The prospects for exporters remain favourable for 2017.
The strengthening of growth and competitiveness has benefited from the expansionist measures adopted by the Government, always bearing in mind the need to continue pursuing fiscal consolidation. The deficit decreased from 3.0% of GDP in 2014 to 2.7% in 2015 and to 2.4% in 2016; the primary surplus (i.e. the difference between income and expenditure net of interest on the public debt) amounted to 1.5% of GDP in 2016.
To fully appreciate the efforts made by the country in terms of fiscal adjustment in past years, it should be noted that between 2009 and 2016 Italy was the Eurozone country which together with Germany maintained the highest average primary surplus and was among the few countries to have a positive balance, whereas most other Member States saw their position deteriorate over that period.
Fiscal policy has given priority to interventions that promote investment, productivity and social cohesion. Using the increased revenues resulting from the fight against tax evasion to reduce taxes and the strengthening of growth are factors that have made way for a significant reduction in fiscal pressure. The sum of the various tax reductions or equivalent measures, starting with the monthly reduction of Euro 80 in income tax for employees with low and average incomes, already brought the tax burden down to 42.3% in 2016 (net of the income tax reduction of Euro 80) from 43.6% in 2013. In addition to relief for families, the overall tax burden for businesses has been significantly lowered through changes to IRAP (2015), IMU (2016) and IRES (2017).
the sustainability of public finances: after rising by more than 32 percentage points between 2007 and 2014, this indicator has substantially stabilised in the last two years, an achievement that is all the more significant in the light of the limited changes in prices in the period.

The crisis, and globalisation before that, made clear the limits of economic policies oriented exclusively toward GDP growth. The increase in inequality in recent decades in Italy and in most developed countries and the continuing insufficient attention to environmental sustainability call for more intense public debate and rethinking of strategies in economic policy.
With this in mind, in August 2016 in the reform of the law on accounting and public finance, the parliament voted by a large majority to include fair and sustainable well-being among the objectives of the Government's economic policy. The DEF must give an accounting of the main factors of well-being in the past three years and, for the same variables, must predict future trends and the impact of policies. Italy is the first advanced country to give itself such a task.
The law mandates a Committee for fair and sustainable well-being to select and define the indicators that governments will be required to use to monitor the evolution of well-being and to assess the impact of policies; pending its conclusions, the Government has decided to introduce some provisional indicators of well-being already this fiscal year. Alongside the traditional targets – first of all GDP and employment which continue to be crucial indicators for assessing and promote the welfare of citizens – the DEF reports on changes in average disposable income, income inequality, lack of participation in the labour market, and emissions of CO2 and other climate-altering gases. The DEF also sets policy objectives for these variables.
For the 2014-2016 three-year period the data show a substantial improvement in the indicators considered with the exception of emissions which, of course, reflect the impact of the economic recovery. In particular, inequality shows a significant decrease as a result of growth in employment and the effectiveness of the measures put in place in recent years. The Government's objective is to continue to reduce inequality over the next three years.

Needed Reform in the European Union

The Italian Government considers it a priority to continue to promote its own strategy for reform of the European institutions. A new form of governance is needed which, along with monetary and financial integration, will have to set as its central points economic growth, employment and social inclusion, and it must introduce a means of risk-sharing among member countries alongside the means of risk reduction associated with each individual country. Increased sharing of risks improves the capacity and flexibility of the Member States to adjust to shocks and helps reduce any specific risks. The new governance of the area should promote budgetary policies that are favourable to growth, which should be better distributed among Member States.
Europe will need to adopt shared mechanisms that can alleviate the cost of reallocation of labour and of crises involving a sector or a territory; a common tool for macroeconomic stabilisation will also allow countries that are subject to strict budgetary constraints to adopt counter-cyclical policies to respond to an increase in unemployment in the case of asymmetric shocks. Greater risk-sharing between countries would not reduce the incentives to adopt national reforms. Instead, the non-sharing of efforts to meet common challenges risks jeopardising public European assets that are essential for the integration process.
The management of flows of migrants and asylum seekers to countries of the Union represents an unprecedented challenge that Europe is facing today in the field of freedom of movement of persons, respect for human rights and the security of Europe's citizens. This is a systemic crisis to which we must provide a common European response, through a common management of borders. Integration policies in national labour markets need to be planned and implemented; this would make it possible to reap the benefits traditionally associated with immigration which, in an ageing society, will in the medium to long term outweigh the short-term costs associated with the management of migration flows.
In parallel, a targeted and reinforced cooperation should be established with the countries of origin and transit of migrant flows that includes an investment plan to address the root causes of the phenomenon, the search for decent living conditions, for safety, for a job. Any offer of financial and operational support to partner countries must be conditional upon precise commitments in terms of effective border control, reduction of the flow of migrants, cooperation on repatriation/readmissions, and the strengthening of law enforcement against trafficking in human beings and terrorism.

In the light of the need for consolidation dictated by the high public debt accumulated in previous years, since 2014 the limited room for fiscal manoeuvre has been used to support growth and competitiveness. With a new focus on the composition of the budget, cutting unproductive expenditures to finance investment and a reduction in the tax burden, the country has embarked on a virtuous but narrow path between two opposing requirements, to reduce the deficit and to support growth. This has led to positive growth figures, while avoiding dangerous falls in prices, and has allowed us to contain the fiscal deficit and stabilise debt.
These are results that are not to be underestimated. Just as we must not underestimate the strict constraints that the public finances will continue to face in the future: these relate to a likely reduction in monetary stimulus, medium-term objectives that have not been achieved and high and widespread geopolitical risks. The tenor, composition and intensity of the economic policies the Government adopts will continue to be consistent with this defined pathway.
The intensity of fiscal consolidation, but also the various economic policy options, will therefore be evaluated not only based on short-term goals, but especially for their medium and long-term implications, considering that the march towards a solid public financial position is a necessary commitment to the new generations to come. Healthy public finances produce concrete effects on the budget by helping to reduce the interest burden which absorbs resources that otherwise could be directed to economic policy objectives such as reducing the tax burden, investment and social inclusion.
Careful reflection on the practical value of the country's credibility is particularly relevant in the light of the widespread expectation that the ECB will end its program of sovereign bond purchases by the end of 2018. Italy must not find itself unprepared. 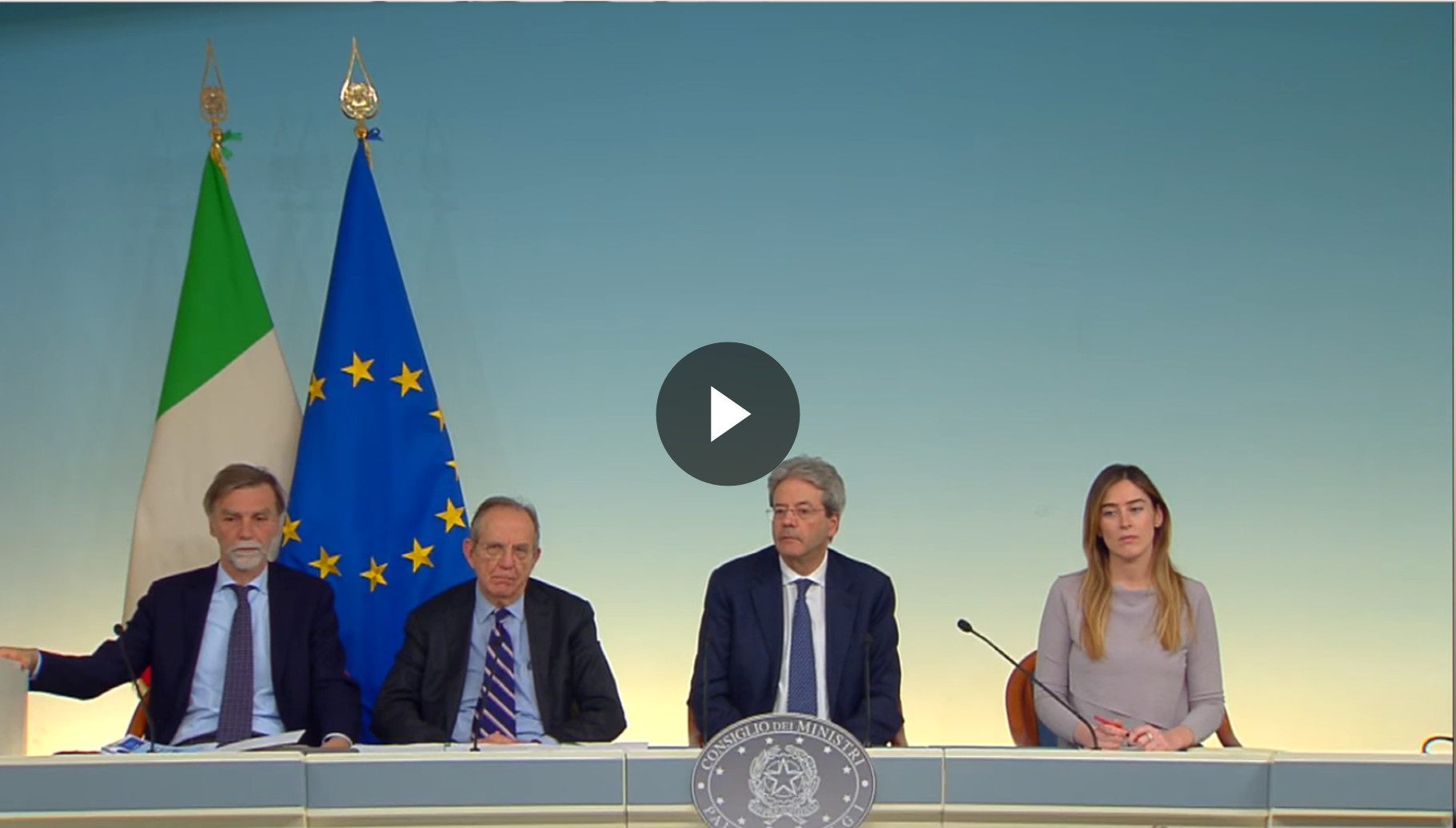 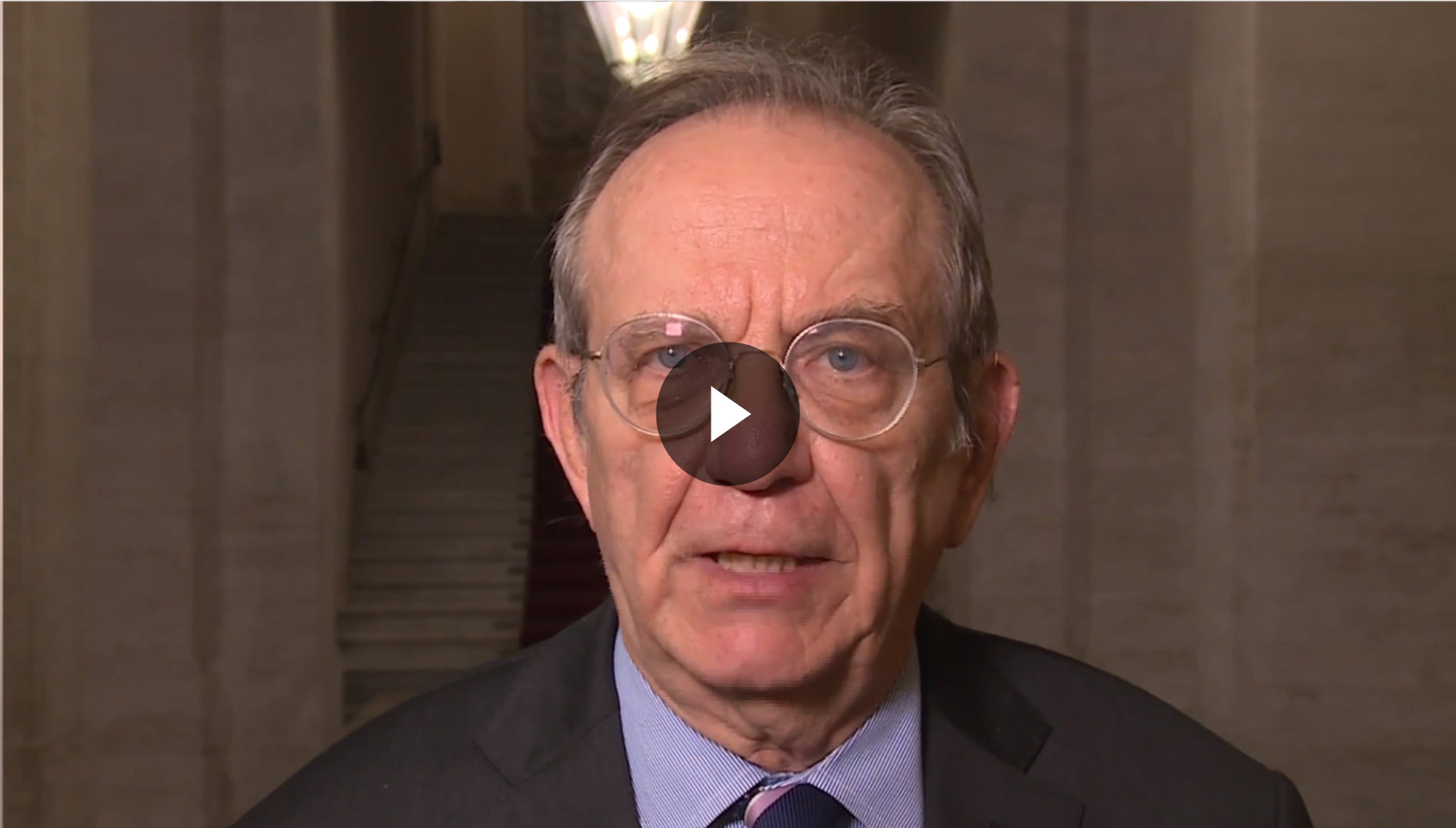