Some clarification is needed regarding certain analyses reported on the media concerning the size of fiscal adjustment measures implemented by Italy in recent years. This can be done by recreating what has actually been Italy’s fiscal effort during the financial crisis. According to some observers, the consolidation of public finances undertaken by our country, over the past six years, could place us at the bottom of Euro area countries. Nothing could be more false.

Between 2009 – the first year to register a contraction in Euro area GDP – and 2016, Italy’s average deficit was 3.4 percent (fig. 1); only six Eurozone countries’ deficit was below the 3 percent threshold. If we match this result with the significant fall in GDP registered in the same time period, it is clear the extraordinary degree of fiscal effort put in place in Italy. 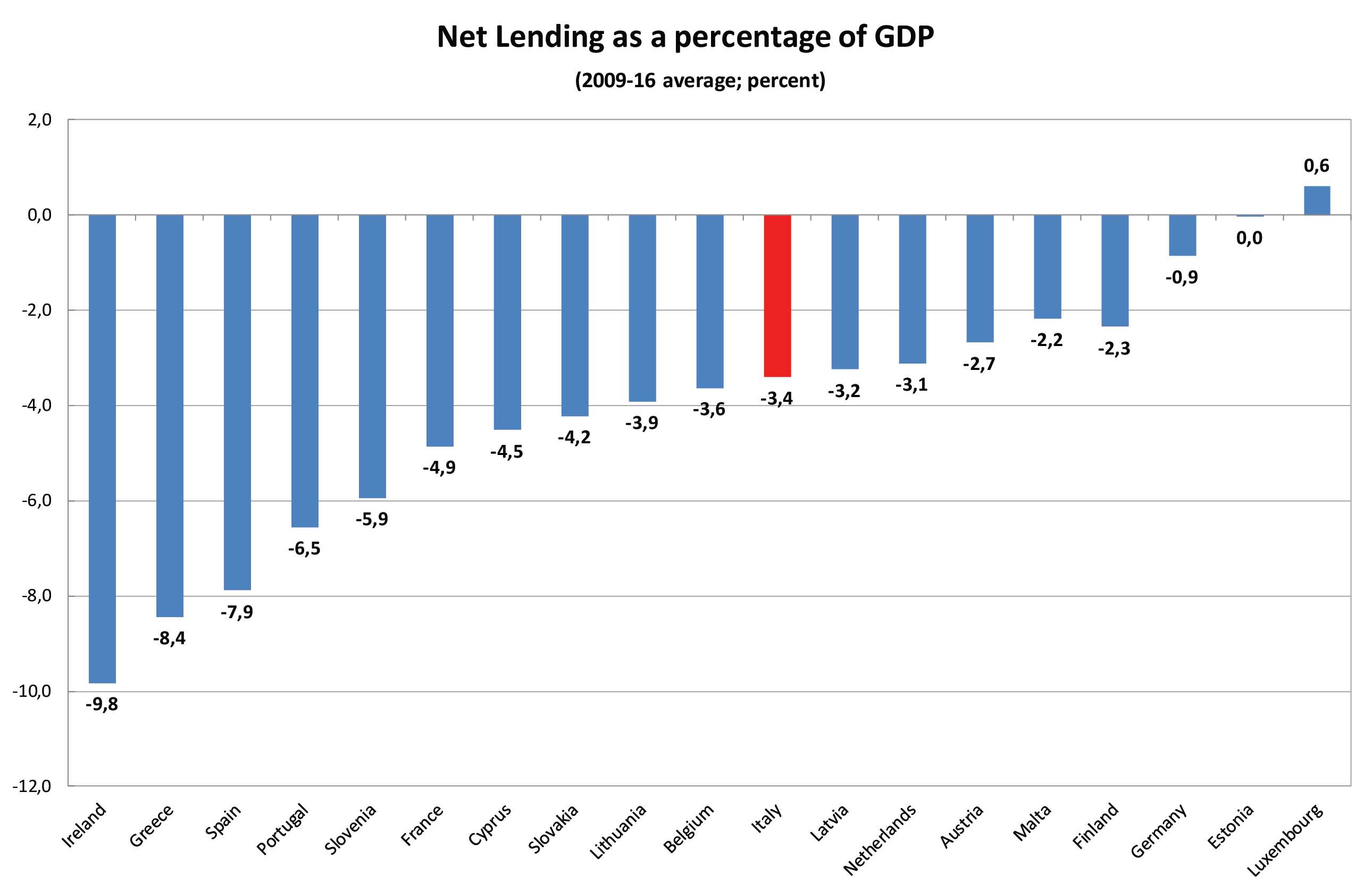 To fully appreciate the effort made in Italy one needs to look at the primary balance, excluding the public debt burden: Italy turns out to be the country that, together with Germany, maintained the highest primary surplus on average (1.1 percent; fig. 2) over the 2009-16 period. It also ranks among the few to register a positive balance, as most Eurozone member states saw their positions deteriorating during the same time period. For example, in this same period, Spain had an average primary deficit of 5.2 percent of GDP while France had 2.6 percent. 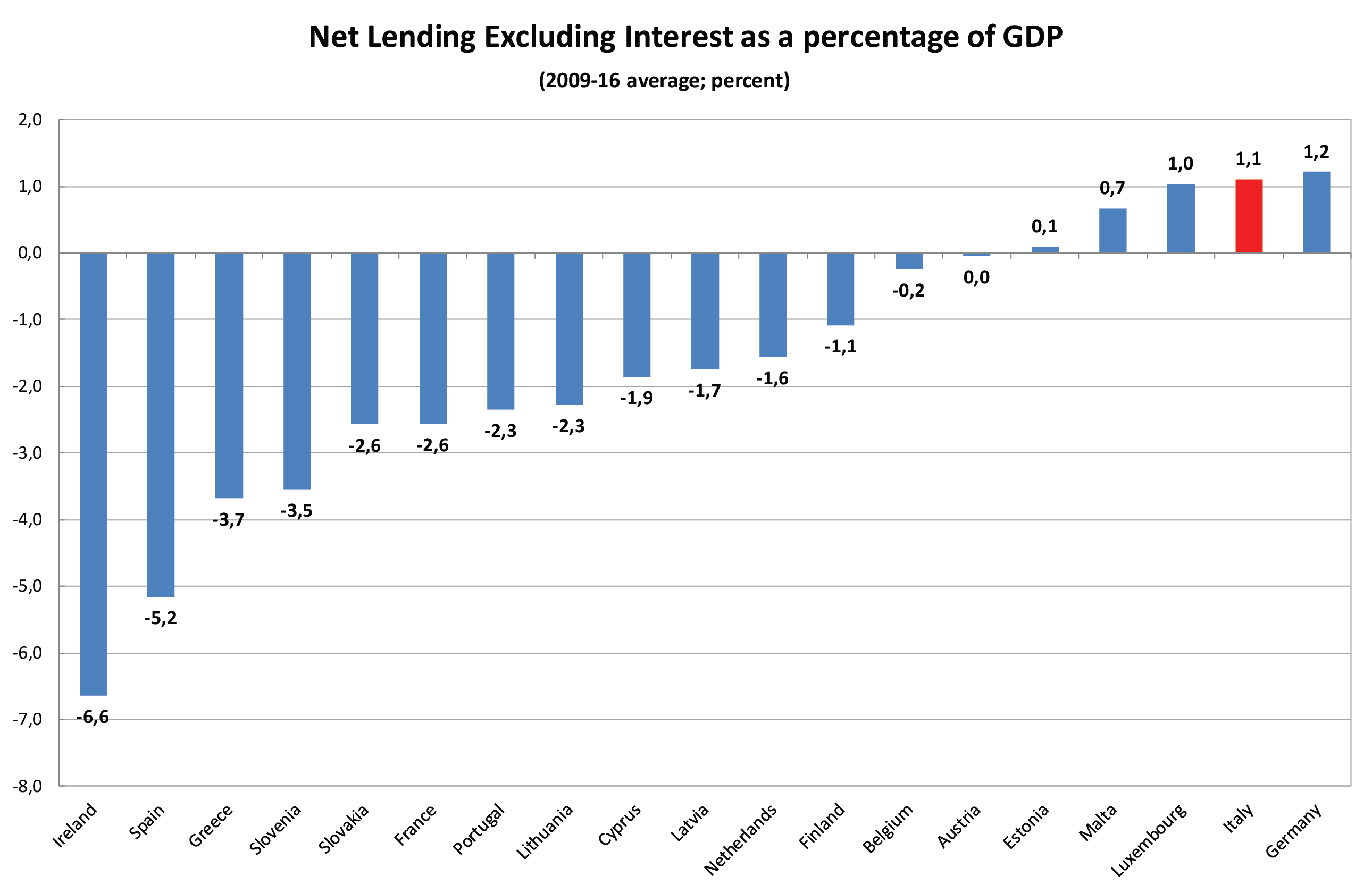 Aside from the debt burden, the current balance should be adjusted for the effects of the economic cycle. If we correct the primary balance series for the cycle, Italy’s consolidation effort comes out as even stronger; exception made for Greece –that with the aim of receiving financial assistance implemented a long set of significant adjustments– Italy clearly emerges as the country that put in place the most significant consolidation of public finances within the area (fig. 3). 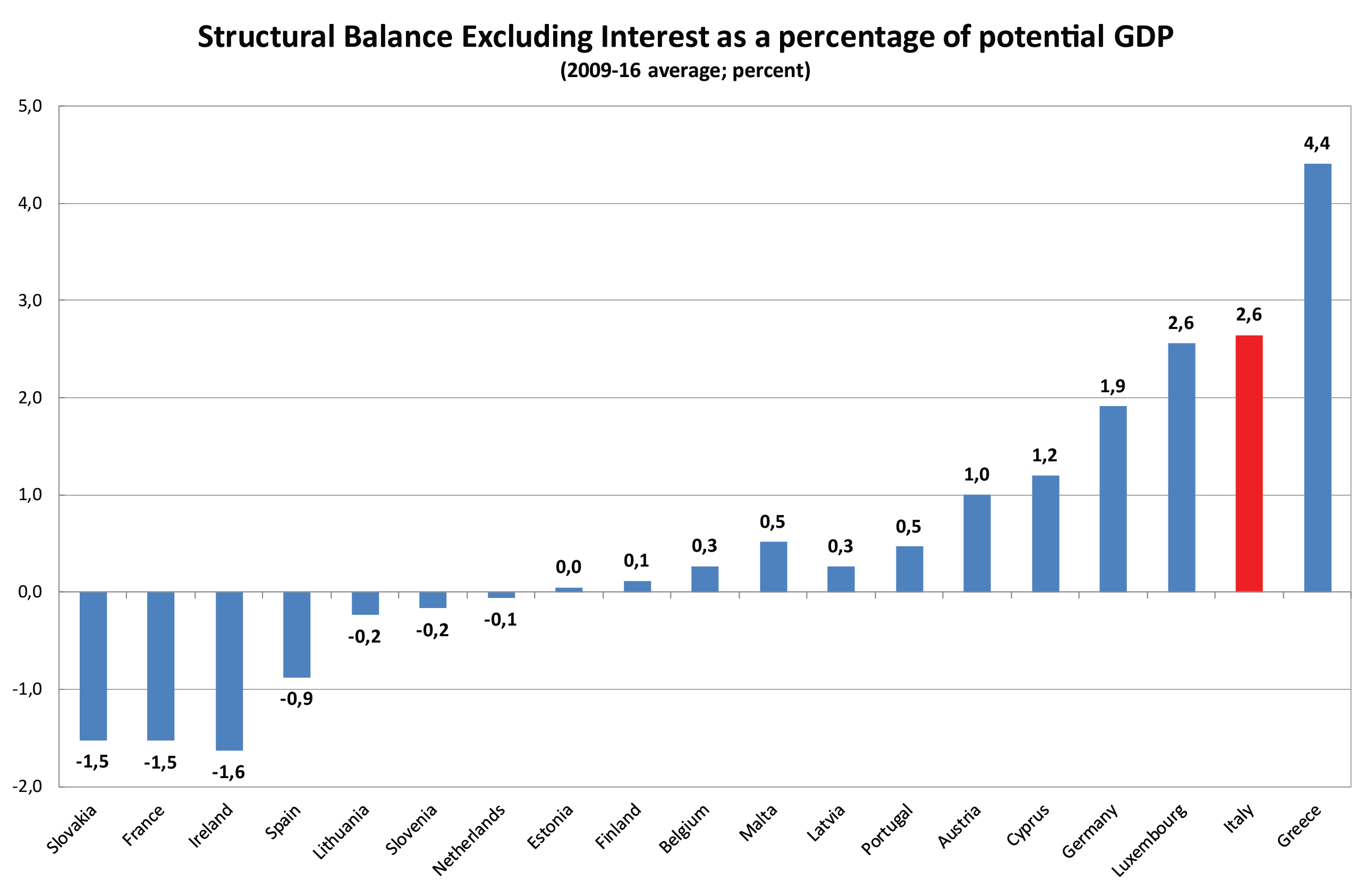 There is obviously a good reason behind the choice of a prudent fiscal policy: our high public debt country profile (fig. 4a). Nevertheless, it is precisely thanks to this prudent budgetary policy that the Italian debt has increased during this period at a considerably lower rate than that of other EMU countries (fig. 4b). Furthermore, even if so far the debt-to-GDP ratio substantially stabilised, it is due to declineas of 2017. 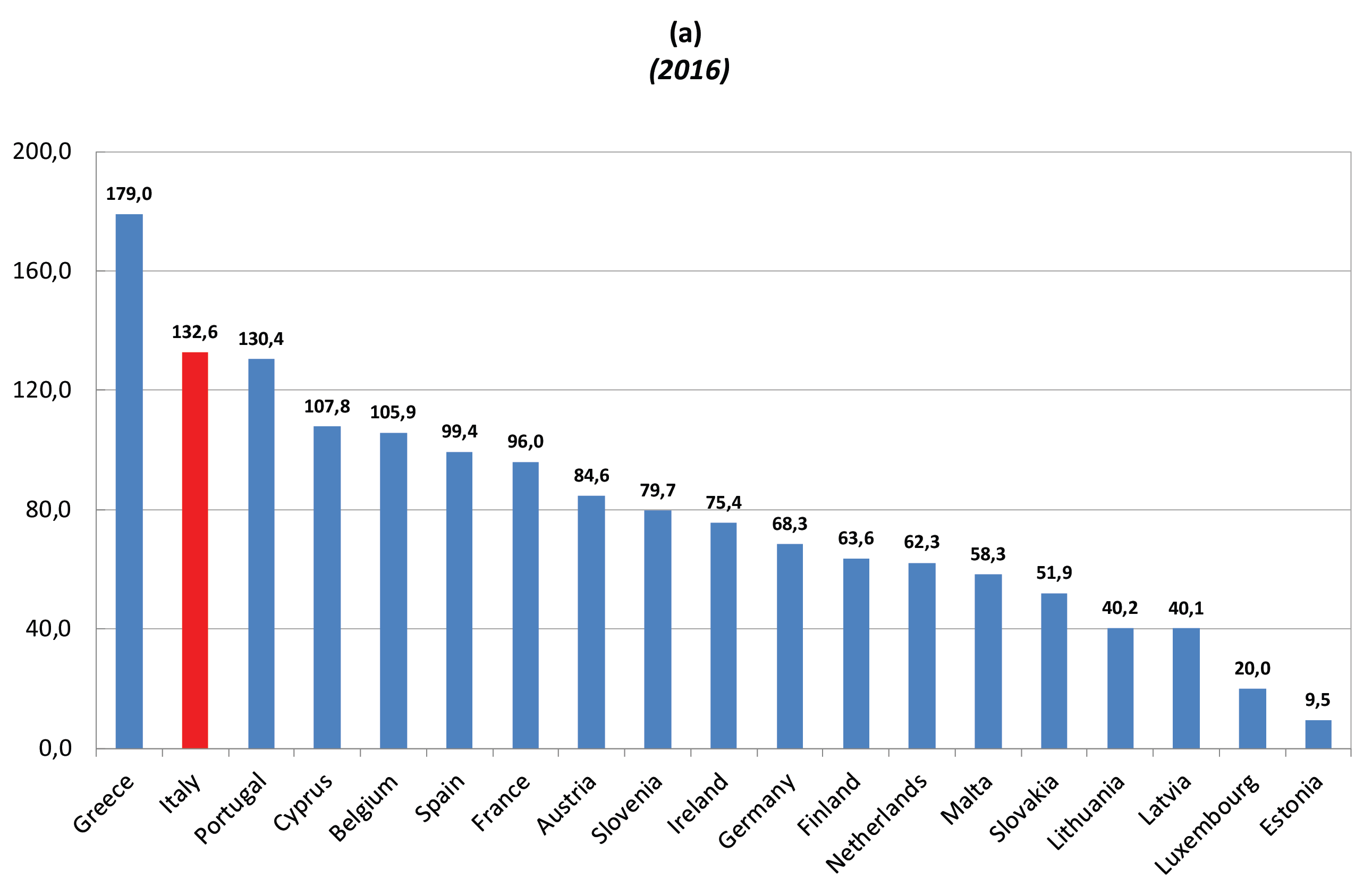 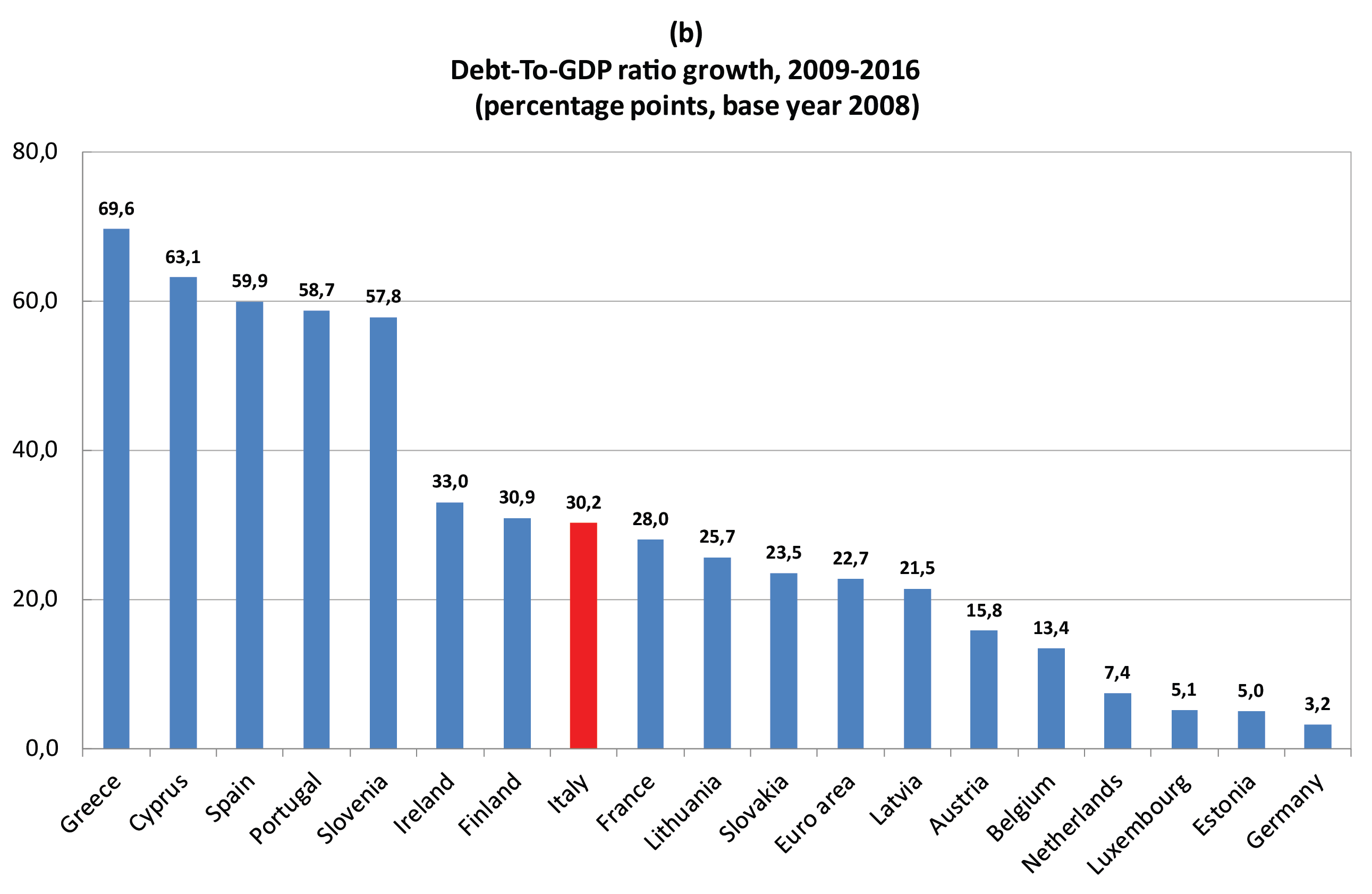 These results correspond to European Commission’s computations according to which Italy ranks among low risk countries with regard to long-term public finance sustainability (fig. 5). 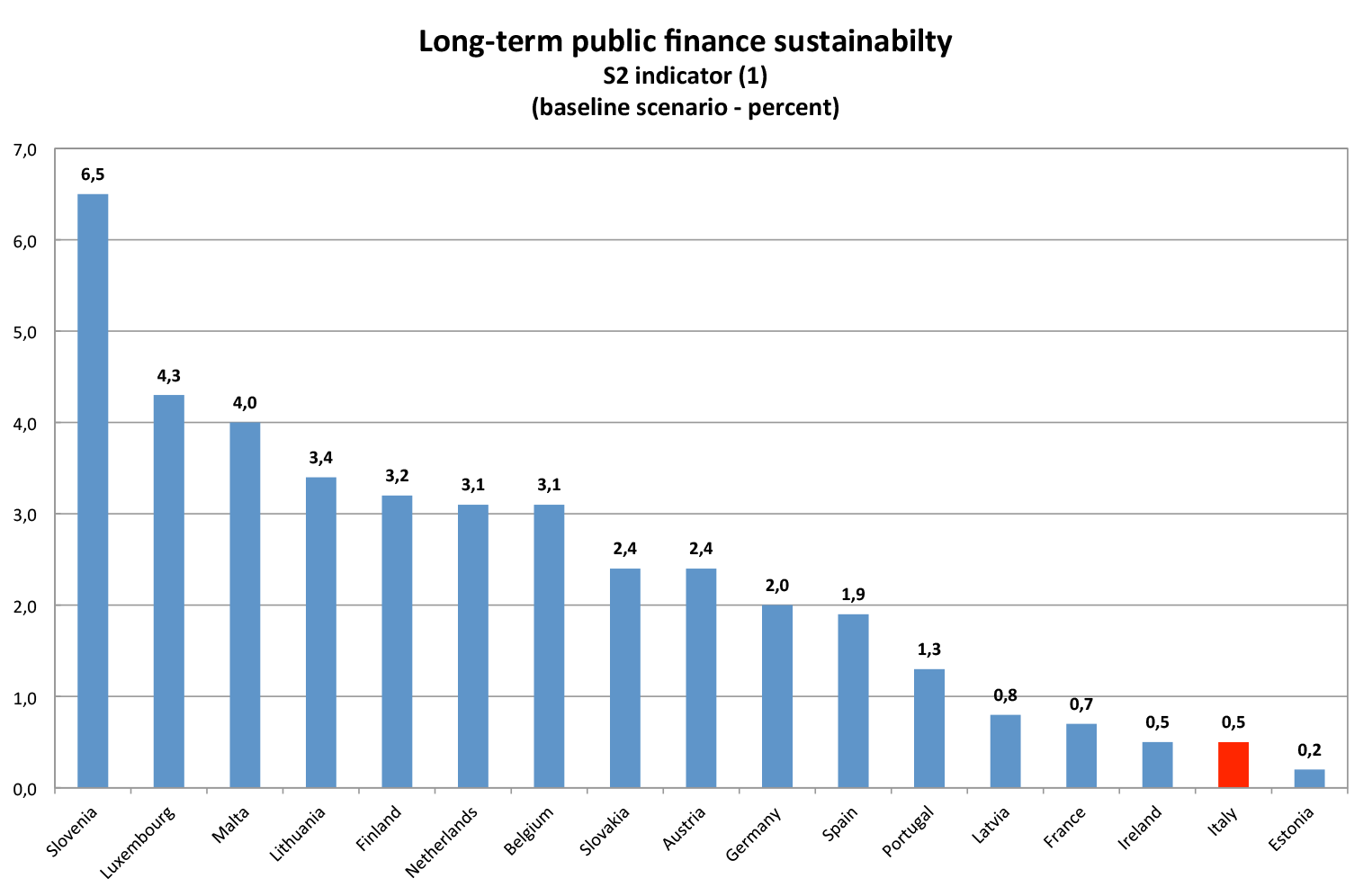 (1) The S2 indicator shows the long-term public finance sustainability of countries that are not covered by macroeconomic adjustment programmes based on a methodology agreed at European level, over the infinite horizon and on the basis of the government’s inter-temporal budget constraint and projected macroeconomic variables under the assumption of a fiscal policy that remains unchanged with respect to the latest projection issued by the Commission. Greater (positive) S2 indicator rates are associated with greater fiscal adjustments needed to ensure public fiscal sustainability.
Source: Debt Sustainability Monitor2016, European Commission.

Italy’s fiscal consolidation effort preserved the independence of its fiscal authority that allowed the Government to adopt a series of growth-enhancing measures which, in turn, proved effective in achieving fiscal stability. In other words, Italy’s fiscal consolidation takes growth completely into account. As a result of this strategy, Italy emerged from recession, and during the past three years its deficit-to-GDP ratio fell below 3% (from 3.0 per cent in 2014 to 2,7 e 2.4 per cent in 2015 e 2016, respectively; fig. 6).

The Government intends to continue alongside this path of fiscal consolidation, ensuring control of its public accounts and scrutinising decisions about revenues and expenditures to favour economic growth. These measures are part of a political and economic strategy that prioritises fiscal stability while providing support for growth and ultimately job creation by also re-launching public and private investment. 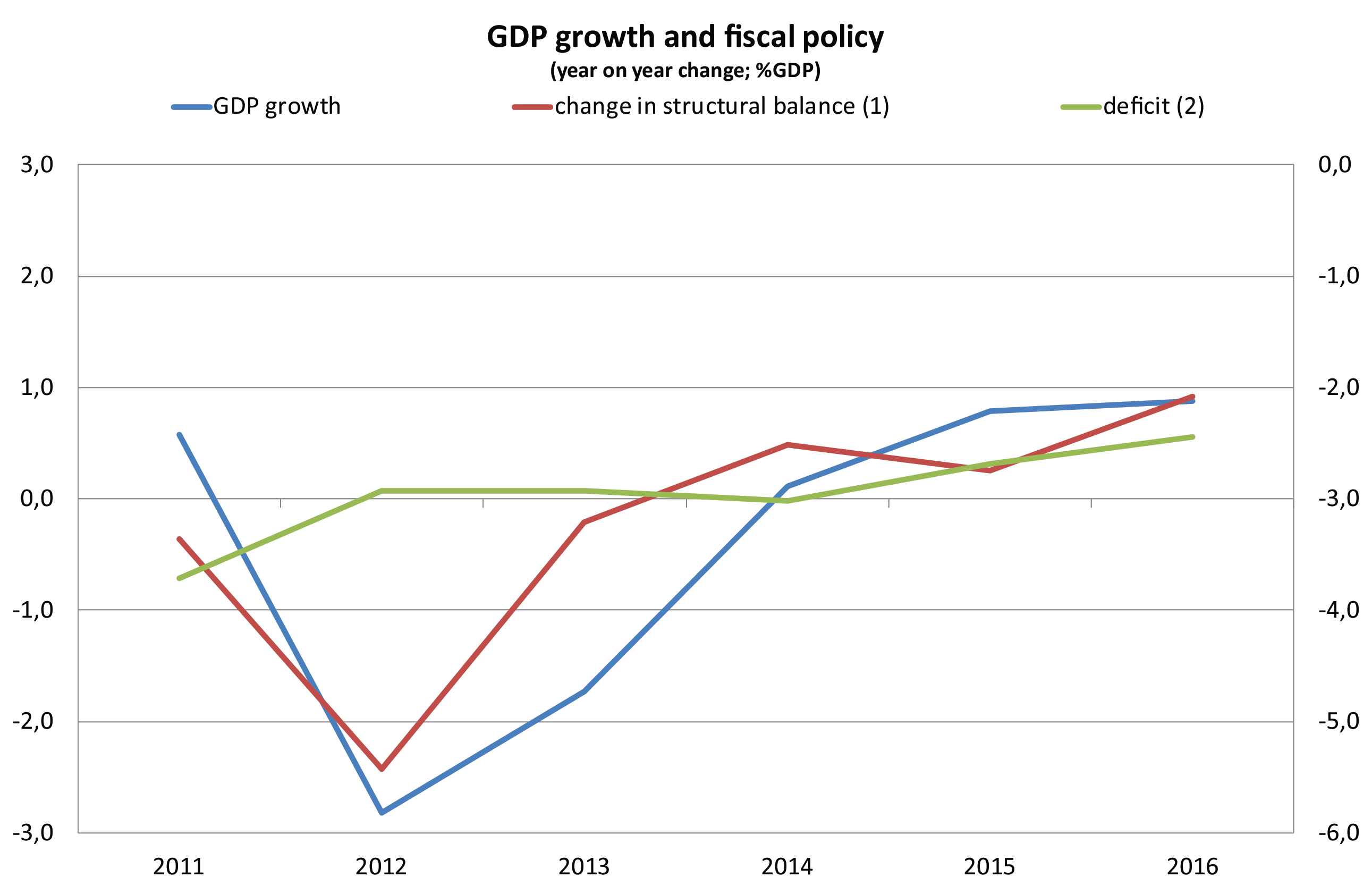